On Monday night, Nigeria became the latest country on the continent to impose a 14-day lockdown in major states across the country as President Muhammadu Buhari invoked a law from the country's colonial era. But the millions of Nigerians such as food vendors, hairdressers, cleaners, and others who earn their wages daily and make up the informal job market, say they are faced with stark choices.

Cecilia Achonwa runs a local roadside restaurant in Yaba, a suburb in Lagos mainland selling affordable lunch packs to students and local businesses.Before coronavirus, her food business saw lines of people forming to buy their meals. Now they are all gone and her business has almost collapsed, she says.The 53-year-old says she is responsible for the welfare of five chefs who were hired from neighboring West African country Togo."What they are managing now is their allowance and the remaining foodstuff that I had stocked at the restaurant to sell this month when that finishes, we'll have nothing," she told CNN.In the lead up to the shutdown, Lagos, a bustling metropolis with around 20 million people, was thronging with crowds as shoppers raced around to stock up to beat the 11 p.m. deadline set for the shutdown of the city against coronavirus. 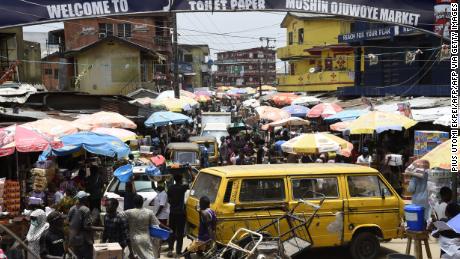 But many could barely afford to stock up as prices had increased."Some people are shouting, they are crying and going home without buying anything. Things are too expensive," Felicia Emmanuel, a trader at the Obalende market told CNN."It's bad ooo, a lot of people, it's the profit they make per day is what they will eat. As they are shutting down now, I wonder what it will look like, hungry will kill some people. We pray that government should do something about it. We are begging them, they should help us," she added.Another resident Abiodun Gaji told CNN. "There are no provisions, no facilities made available for us to cook. So people are panic buying goods and food … It's crazy. People are hungry, some people, millions of people depend on daily sales. They don't make sales, they don't eat."A local food seller in Abuja, Nigeria's capital declined to be named, but told CNN: "I cannot afford to stay at home and not feed my children. I know it is risky to be out here, but if I don't come out to look for what to feed my family, we will die of hunger faster than being killed by the virus." 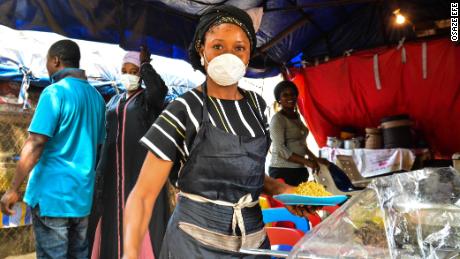 Another challenge facing Lagosians and others like them around the country is that Nigeria's power infrastructure is weak and blackouts are frequent.One shopper, Amaka, a bank worker says she does not want to buy too much as she will end up trashing the items. "There is no light and you can't preserve items. We don't have steady light in Nigeria and in my area too. We hope this ends as soon as possible. We are all buying out of fear because you can't go to the market everyday. We just hope it will be over soon."

Efforts are being made to help ease the burden of the lockdown on vulnerable members of society, Nigeria's government says.Lagos State governor, Jide Sanwo-Olu is facing his first major crisis since he was elected last year and is being widely praised for his efforts in handling the crisis. He says his administration will distribute food to 200,000 homes with an estimated six people per household, as a start. However, millions more live in extreme poverty in the city. At a special briefing attended by CNN, the country's vice president said the welfare of the most vulnerable members of society was important to the President, adding that he had issued a 10 billion Naira grant ($25 million USD) to Lagos, which is the epicenter of coronavirus in Nigeria, with 81 cases of the 131 announced as of Monday morning. 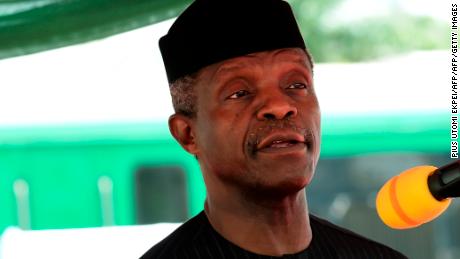 "The President constituted an economic sustainability committee on how to alleviate sufferings of Nigerians at this time," Yemi Osinbajo said. "The committee is to take care of the economic challenges and fallout of the pandemic," he added. The country's humanitarian minister also announced Monday that cash transfers were being paid to the poorest households. Millions of dollars have also poured in from wealthy individuals such as Africa's richest man Aliko Dangote and corporations.

However in Ikorodu, a low-income community on the outskirts of Lagos, the promises of the committee seem far away.

"We are hungry, we are hungry," a throng of angry women gathered, unable to purchase any food items. Among them is popular Lagos businesswoman and fashion designer Toyin Lawani. Lawani, who runs 33 businesses from a single building in Lekki, Lagos, has been distributing food packs, hand sanitizers and masks that she produced in her factory. She told CNN: "I had to come here because most of my staff are from here and they told me about this situation."

Nigeria, which has the largest number of people living in extreme poverty in the world, has inadequate housing stock which has been described as a "complete crisis," by the United Nations. "Informal settlements are ballooning where conditions are inhumane and perhaps the most severe I have seen worldwide," Leilani Farha, special rapporteur on adequate housing last year, said last year.Many families live in one or two-bedroom apartments known colloquially as 'face-me-I face-you,' tenement style homes where residents share a communal bathroom and kitchen spaces. Social distancing becomes near impossible in such conditions.Abdulwahab Abubakar, a motion designer, says he had to leave his home in Shomolu, a largely populated region in Lagos."I left because it is cramped up and it is almost impossible to avoid people thRead More – Source

Zimbabwe doctors and nurses down tools over lack of protective gear