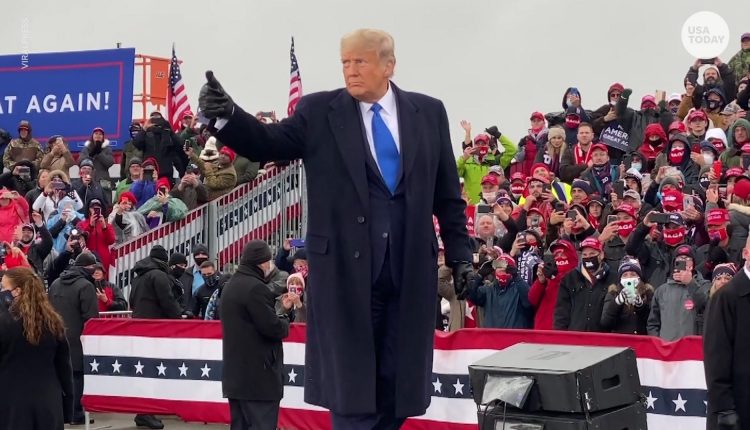 President Donald Trump has claimed, without offering evidence, that the election was overrun by fraud and his campaign filed a number of lawsuits attacking the voting process in several battleground states he went on to lose.

State leaders and election officials – many of them Republican – in those crucial swings states have responded by assuring voters there have been no signs of widespread fraud despite what Trump and his supporters have alleged. And state leaders, including many Republicans

Here is a look at what those officials have said in response to Trump’s unsubstantiated claims since President-elect Joe Biden was declared the winner.

Biden flipped the state of Arizona blue, becoming the first Democrat to carry it in 24 years.

Trump and his allies have repeatedly claimed there was voter fraud involved, with his supporters spouting conspiracy theories like “Sharpiegate” – an unfounded suspicion that election workers were invalidating votes. But no claims of any substantive impropriety has been supported by evidence.

Some local GOP officials called out the claims, such as Arizona’s Republican Attorney General Mark Brnovich, who said that there was no fraud in the election, and no grand conspiracy to defeat Trump in Arizona.

“If indeed there was some great conspiracy, it apparently didn’t work,” Brnovich told Fox Business’ Neil Cavuto. “The county election official, who’s a Democrat, lost, and other Republicans won.”

He also shot down the conspiracy someone must have changed voters selection’s at the top of the ticket, as Trump and GOP Sen. Martha McSally lost, while other Republican candidates down the ticket won.

“It came down to: People split their ticket,” Brnovich said. “People voted for Republicans down-ballot, and they didn’t vote for President Trump or Martha McSally. So, that’s the reality.”

On Friday. lawyers for the Trump campaign dropped a lawsuit seeking a review of all ballots cast on Election Day after finding the margin of victory in the state couldn’t be overcome.

Biden also flipped Georgia, a traditionally ruby-red state, to the Democratic column this election, with the race being called for him Friday just hours after a hand recount began. It marks the first time a Democrat has won Georgia since 1992.

Georgia’s Secretary of State Brad Raffensperger has dismissed claims of voter fraud, saying, “We have ongoing investigations but we have not seen something widespread.”

In doing so, he has come under fire from members of his own party. The state’s two incumbent GOP senators have called for his resignation, claiming he hasn’t been transparent. Raffensperger called the allegation “laughable.”

Friday night, after the projection for Biden’s win in Georgia was made, Trump tweeted: “Georgia Secretary of State, a so-called Republican (RINO), won’t let the people checking the ballots see the signatures for fraud. Why? Without this the whole process is very unfair and close to meaningless. Everyone knows that we won the state.”

Raffensperger ordered a manual recount in the presidential election, which began Friday and will be completed by Wednesday. Though a machine recount was required under Georgia law because of the slim difference in the results, the hand recount was not mandatory.

Raffensperger denied claims he ordered the hand recount under pressure from the Trump campaign. He cast doubt the recount will change who the victor is, as Trump is trailing in the state by around 14,000 votes.

The Associated Press found there have been at least 31 statewide recounts across the country since 2000. Three of those changed the outcome of the election. The initial margins in those races were 137 votes, 215 votes and 261 votes.

“People are just going to have to accept the results,” Raffensperger told The Washington Post in an interview on Wednesday. “I’m a Republican. I believe in fair and secure elections.”

Additionally, Lt. Gov. Geoff Duncan, also a Republican, has supported Raffensperger, who oversees the election. Duncan said he has “not seen any sort of credible examples” of wrongdoing.

Biden’s wins in Michigan, Pennsylvania and Wisconsin helped return the “blue wall” that Hillary Clinton lost in 2016 back to the Democrats.

In Michigan, the governor, secretary of state, attorney general and lieutenant governor are all Democrats, and have criticized the Trump campaign’s largely baseless claims of widespread fraud in the state.

One of those claims alleged Dominion Voting Systems changed vote tallies in Michigan from Trump to Biden.

Posthumus Lyons defended the canvassing process, saying, “We’ve just got a lot of checks and balances and transparency here in Michigan, and in Kent County we take that very seriously”

She continued, “I am 100% confident in the results in Kent County, and I’m confident that our canvass, once its all concluded, will validate that.”

Nevada Secretary of State Barbara Cegavske, a Republican, said her office wouldn’t quantify how many complaints it had received.

“Many voter fraud complaints lack any evidence and are more complaints about process or policy,” she said.

It was Biden’s home state of Pennsylvania that pushed him past the 270-electoral vote threshold last week, securing his future as the 46th president of the United States.

Al Schmidt, the Republican city commissioner of Philadelphia, told CNN that despite the spread of false voter fraud claims, the 2020 presidential election was the “most transparent and secure election” in the city’s history.

He called some of the claims “fantastical” and “completely ridiculous allegations that have no basis in fact at all.”

Trump and his allies spread false claims that the mail-in votes were manipulated, and misleadingly insisted GOP officials were barred from properly monitoring election workers.

Trump attacked Schmidt by calling him a  “RINO,” or Republican in name only.

“A guy named Al Schmidt, a Philadelphia Commissioner and so-called Republican (RINO), is being used big time by the Fake News Media to explain how honest things were with respect to the Election in Philadelphia,” he tweeted. “He refuses to look at a mountain of corruption & dishonesty. We win!”

Additionally, Dauphin County Commissioner Mike Pries, a Republican, refuted claims of voter fraud, saying, he has not “seen or heard of any credible instances.”

Gary Eichelberger, a Republican and chair of the Cumberland commissioners, said, “We have not seen anything other than some questions about the process that have been exaggerated into allegations of misconduct.”

In Wisconsin, another “blue wall” battleground state where Biden narrowly edged Trump, Republican Speaker of the Assembly Robin Vos said he would form committees to investigate voter fraud in the wake of the presidential elections.

Meagan Wolfe, the Wisconsin Elections Commission Administrator, who was unanimously confirmed by the Republican-controlled state Senate, said any allegations of fraud were “insulting.”

“The election process in itself is designed to be transparent,” she said. “It’s designed for people to ask questions and raise concerns every step of the way … Everything from the issuance of absentee ballots to voter registration records, those are all publicly observable, available to public scrutiny.”