On Wednesday, Trump accused the Kremlinof helping North Korea skirt international sanctions aimed at curbing North Korea's nuclear and ballistic missile programs."Russia is not helping us at all with North Korea," Trump told Reuters in an interview. "What China is helping us with, Russia is denting. In other words, Russia is making up for some of what China is doing."Trump's rare criticism of Russia came as he commended China for largely complying with international sanctions passed in 2017 that have targeted North Korean shipping, coal, seafood and labor. His comments appear to reference reports that Russian tankers have helped refuel North Korea with shipments at sea, and follows allegations from US officials that Russia has been lax in its implementation of UN Security Council sanctions.Russian Deputy Foreign Minister Igor Morgulov told state media Thursday that the accusations made by the United States were "absolutely unfounded." "Russia is fulfilling its obligations under the corresponding UN Security Council resolutions in full," he added. "The relevant UN Sanctions Committees do not set any claims to us (with regard to fulfilling the sanctions against North Korea)."Trump welcomed the ongoing dialogue between the two Koreas regarding next month's Winter Olympics in Pyeongchang, South Korea, Reuters reported, but said he didn't think direct US talks with Kim Jong Un would solve anything.On Wednesday, South Korea announced its athletes will march with their Northern counterparts at the Winter Olympics opening ceremony under a unified flag, a diplomatic breakthrough following days of talks between the two countries.

US Senator Tammy Duckworth, who returned to the US from a trip to South Korea and Japan on Tuesday, said it is clear that the Russians and Chinese continue to aid North Korea despite additional sanctions."The Russians are definitely providing supplies to the North Koreans and so are the Chinese. It is very clear both the Russians and Chinese are violating the additional sanctions," the Illinois Democrat told reporters Wednesday.Russia officially employs some 40,000 North Korean migrant workers, and possibly more, many of whom work in construction in major Russian cities. Some analysts worry that Moscow will find loopholes for them to stay, citing "humanitarian" reasons."The two countries that consume the most North Korean slave labor are China and Russia," she said.In late December, the US spearheaded the passage of a UN Security Council Resolution that levied the toughest restrictions on North Korea to date, banning exports of industrial equipment, machinery, transportation vehicles and industrial metals to the hermit nation.Marshall Billingslea, the assistant secretary for terrorist financing at the US Treasury Department, showed a US Senate panel in September how a handful of vessels were skirting sanctions by transporting illicit North Korean coal while traveling between China and Russia. Billingslea also said North Korean bank representatives "operate in Russia in flagrant disregard of the very resolutions adopted by Russia at the UN."Experts CNN spoke with believe that while Russian firms or individuals may have helped North Korea, the scale of those operations are relatively small."I don't think that the Russians can offer what the North Koreans are really looking for," said Anthony Ruggiero, an expert in the use of targeted financial measures at the Foundation for the Defense of Democracies."The North Koreans might be able to replace parts of the sanctions evasions schemes they have going in China, but they're not going to be able to pick up wholesale and move," he said. 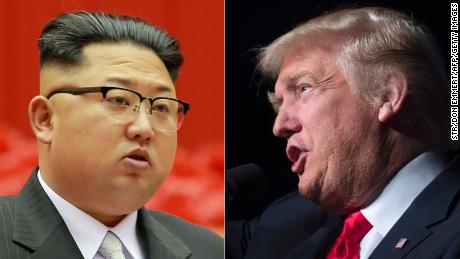 In his interview with Reuters, Trump seemed to acknowledge the significant progress that North Korea has made in its pursuit of developing long-range ballistic missiles that can be paired with nuclear weapons.When asked if he believes Pyongyang has the ability to strike the US, Trump said "they're not there yet, but they're close. And they get closer every day." According to Abraham Denmark, the director of the Asia Program at the Woodrow Wilson International Center for Scholars and a former US Deputy Assistant Secretary of Defense for East Asia, these types of comments from the President show that Washington and Pyongyang may be on a "collision course" if both sides stick to their current positions. "What's needed is diplomacy, what's needed is flexibility and what's needed is a recognition that the military options come with enormous risks and potentially devastating costs," said Denmark.Trump also declined for the second time in as many weeks to confirm whether he has communicated with Kim Jong Un during the interview. He reaffirmed that he is open to sitting down with Kim, but expressed doubt that direct talks would help."I'd sit down, but I'm not sure that sitting down will solve the problem," Trump said. "I'm not sure that talks will lead to anything meaningful," he said. "They've talked for 25 years and they've taken advantage of our presidents, of our previous presidents."The US and its allies are concerned that the face-to-face negotiations between the two Koreas, the most substantive talks in more than two years, may be a stalling tactic for Pyongyang. Speaking Tuesday during a conference in Vancouver, Canada, Japanese Foreign Minister Taro Kono said Pyongyang's weapon program remained an ongoing threat. "I believe that North Korea wants to buy some time to continue their nuclear and missile programs."US Secretary of State Rex Tillerson said Tuesday that it's crucial for the international community to continue its current pressure campaign against the Kim regime. He also said both Russia and China must tighten their enforcement of existing sanctions."We cannot abide lapses or sanctions evasions. We will continue to call attention to and designate entities and individuals complicit in such evasive actions," Tillerson said in Vancouver. China and Russia were not present at the meeting, which Beijing denounced as demonstrating a "Cold War mentality."

Russian President Vladimir Putin has offered vocal support for the North Korean regime and has publicly questioned the efficacy of sanctions.Speaking at a September forum in the Russian city of Vladivostok, Putin condemned what he called Pyongyang's "provocative" nuclear tests, but he said he understood North Korean concerns and offered a warning to Kim about what happens when leaders give up their nuclear weapons.North Koreans "know exactly how the situation developed in Iraq," Putin said, pointing to the US invasion of Iraq in spite of the country abandoning its nuclear weapons program.