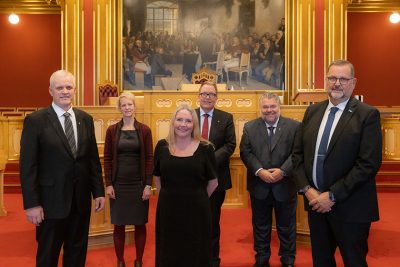 An MP in Norway earns NOK 988,000 (USD 116,000) a year, well over the average income and topped up by myriad benefits including expense-, travel- and housing allowances plus secure and lucrative pensions. It’s the housing benefits and severance pay upon leaving Parliament that have lately grabbed public attention, and harsh criticism.

Newspapers Dagens Næringsliv (DN) and Aftenposten have shocked readers for months with a stream of well-documented articles revealing how various Members of Parliament (MPs) across party lines have lived well and for free at taxpayer expense. DN has reported how several MPs often continued to receive their parliamentary or ministerial pay for several months even after getting voted out of office, while Aftenposten has reported how many have enjoyed free housing for years at taxpayer expense, even when they’ve owned residential units themselves in Oslo and had no housing costs in their home districts.

All MPs representing regions located 40 kilometers outside of Oslo can apply for a so-called pendlerbolig (commuter residence). The idea is that no MP should have to pay for two residences (one in their home region and one in Oslo) after they’ve been elected to Parliament. The state also covers all expenses tied to any of the 143 residential apartments owned by Parliament in Oslo, including all utilities and maintenance costs.

The housing scandal kicked off with the case of one of the Christian Democrats’ MPs, Kjell Ingolf Ropstad from Agder, who later became a government minister and enjoyed free housing in Oslo for more than 10 years. It continued with a string of other cases dug up by Aftenposten that even included two former presidents of the Parliament allowing their own grown children to live in the commuter apartments they’d been allotted. Most are located in downtown or west Oslo, with those held by the Office of the Prime Minister found in the capital’s poshest neighbourhood of Gimle.

Ropstad ultimately ended up resigning from both the government and as leader of the Christian Democrats’ party, while many other MPs caught in the housing scandal are under pressure or at least embarrassed – also because the vast majority of them never paid tax on the advantage they enjoyed by having free housing in Oslo. Tax authorities later pointed out that unless the MPs have housing expenses in their home districts, the value of their state-subsidized housing in Oslo is subject to taxation in addition to their income taxes.

By late September, that had set off a wave of worried MPs contacting the Parliament’s administration to see whether their monthly salaries should also have been subject to tax withholding tied to their housing benefits. Many now face huge tax bills. Others simply have had a lot of explaining to do, like why they’d invested in apartments in Oslo and rented them out, instead of living in one of them at their own expense instead of the state’s.

Lots of Norwegians had also expressed indignation that the 40-kilometer rule was far too generous. Thousands of people living in Drammen or Moss (more than 40 kilometers outside Oslo) commute regularly into Oslo, without receiving any special privileges tied to that. “Our elected politicians have given themselves many golden privliges that ordinary folks can only dream about,” wrote retired officer Finn Kirkestuen in a recent commentary published in newspaper Dagsavisen. “Maybe it’s time to impeach some of them who are caught with both hands in the state treasury.”

Meanwhile, newspaper DN has reported on many cases of outgoing MPs and government ministers applying for and receiving severance pay meant to ease their transition back to civilian life. The severance pay (called etterlønn in Norwegian) has been granted, however, in numerous cases to MPs who already have new jobs lined up but delay starting them in order to take what amounts to a long paid vacation. In other cases, DN has reported how various outgoing MPs have continued to receive a few months worth of their parliamentary income even when they’ve launched their own private business ventures. That’s not allowed.

The housing and severance pay scandals follow several cases over the past few years of MPs cheating on their travel expenses. One former MP was sentenced to jail and other is awaiting trial. She’s due to receive severance pay this fall, after her term in Parliament was up.

The embarrassing scandals have led to claims that the Parliament and its administration have lacked control over their own benefits system, and that its practice has not been in line with intentions. Asked why the media has been left to uncover all the violations, the outgoing president of the Parliament Tone Trøen of the Conservatives insisted that her office has carried out some control itself but stressed that the voters are the real bosses of elected MPs. “We ask for renewed confidence every four years,” she told Aftenposten. “It’s to a large degree an honour-based system, but there are also regulations.” The Office of the Prime Minister has also run into trouble after one of its employees was found to be living in one of its own apartments for ministers. He’s now facing criminal charges and has resigned his post.

She and the Parliament’s beleaguered administrative director, Marianne Andreassen have now launched a “clean-up” effort that will involve an external examination and evaluation of the benefits offered MPs. Aftenposten reported that it’s bound to be expensive, given the hourly fees of private tax attorneys due to be hired in for the job. Trøen has called for a full review of current rules, how they should be practiced and, for example, whether it should still be possible for an MP to be granted a commuter apartment if the MP already owns a residence in Oslo. State tax authorities have suggested, meanwhile, that the Parliament has misinterpreted its rules for years. External legal opinion is thus required.

All this must now be followed up by the incoming president’s office and administration, led since Saturday by the newly elected President of the Parliament Eva Kristin Hansen of the Labour Party. She replaced Trøen in line with the results of last month’s national election, which Labour won, giving it the right to also lead a new left-center government coalition.

In her first speech as President of the Parliament at its formal opening on Monday, Hansen claimed that “attention is directed at politics, debate and decisions, and on how we manage our duties.” She added that “awareness, investigations and critical reviews of us are necessary, because the Parliament is the people’s foremost institution. We must manage the voters’ opinions, values and needs.”

She had already told NRK during the weekend that “Members of Parliament shouldn’t have better benefits than others.” Those returning to Parliament and the Parliament’s 48 new members elected in September can expect changes ahead.