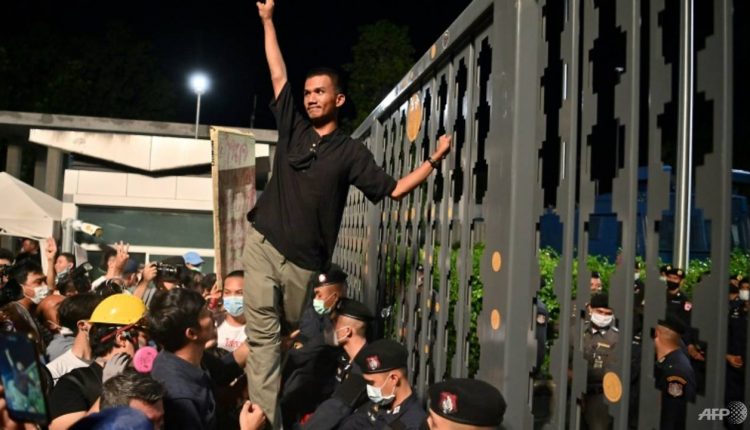 BANGKOK: Thailand's parliament voted on Thursday (Sep 24) to delay making a decision on whether it will amend the constitution, as demanded by anti-government protesters who have demonstrated nearly every day for more than two months.

The parliament, dominated by supporters of the government, opted instead to set up a committee to study the process of the constitutional amendment first.

"The vote to accept a motion for constitutional changes is effectively delayed to November," pro-government lawmaker Chinnaworn Boonyakiat told Reuters.

The decision angered opposition parliamentarians and protesters, more than 1,000 of whom had gathered outside the parliament to press their demands for constitutional change and for the removal of Prime Minister Prayut Chan-o-cha, a former military leader.

Protesters say the current constitution was drafted to ensure he kept power after elections last year. Prayut says the vote was fair.

Wiroj Lakkhanaadisorn, an MP from the opposition Move Forward Party, said the parliament's decision to delay voting on the motion was intended to "deceive the people."

"If the process is delayed by a month to set up this committee, and if the motion is rejected then, it will mean members of parliament cannot propose another such motion again until next year," he said in a tweet.

Protest organiser Tattep "Ford" Ruangprapaikitseree said the government was attempting to "buy time" with the move.

"It shows their insincerity towards the Thai people," he told AFP. "We cannot take it."

Protesters stood on railings to plant pro-democracy stickers high on the closed gates of parliament as guards looked on.

Others spray-painted stencil outlines of a plaque that had been installed during the weekend protest at the historic Sanam Luang park.

The so-called "People's Plaque" was later removed by police. It was meant to reference a plaque commemorating the end of royal absolutism in 1932, which mysteriously vanished three years ago.

Siraphop Attohi, one of the protesters, said: "This is a game to buy more time … We cannot stand by this."

The protests are the biggest challenge to the Thai military and palace-dominated establishment since Prayut took power in a 2014 coup. The biggest protest drew tens of thousands of people at the weekend.

Some protesters say the constitution also gives too much power to King Maha Vajiralongkorn and have called for his influence to be reduced, challenging a longstanding taboo of not criticising the monarchy.

The 2017 constitution was written by a military-appointed committee and passed a nationwide referendum in 2016 at which opposition campaigning was banned.

The assembly combines an elected lower House of Representatives and a military-appointed Senate.

The king sits at the apex of Thai power, supported by an arch-royalist military and the kingdom's billionaire clans.

The royal family enjoys support from mostly older conservatives, dozens of whom marched to parliament on Wednesday to submit a petition with 130,000 signatories against constitutional change.

The ultra-wealthy monarch spends much of his time in Europe, but he was in Bangkok Thursday to mark Prince Mahidol Day, laying a wreath at his grandfather's statue, according to local media.

‘Enough is enough’: China attacks US at Security Council