Russia to pull troops back from near Ukraine 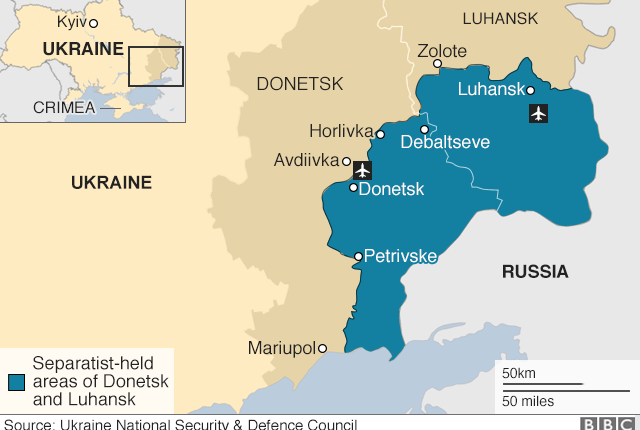 After weeks of tension over a build-up of Russian troops close to Ukraine’s border, Russian Defence Minister Sergei Shoigu has ordered a number of units in the area back to their bases.

The EU estimated that more than 100,000 Russian soldiers had amassed near the border as well as in Crimea, which was seized and annexed by Russia in 2014.

Speaking in Crimea, Mr Shoigu said units on exercise would return to base.

The aims of the “snap checks” had been achieved, he added.

Ukrainian President Volodymyr Zelensky, who earlier challenged Russian President Vladimir Putin to meet him in the conflict zone, welcomed the decision to “de-escalate” tensions at the border.

“The troops have demonstrated their ability to provide a credible defence for the country,” the Russian defence minister said, adding that he had instructed the commanders of units from the 58th and 41st armies as well as several airborne divisions to start returning to their permanent bases on Friday and to complete the operation by 1 May.

President Zelensky raised the troop build-up with European leaders last week. Ukraine’s armed forces chief said Russian military units had been moving into the Rostov, Bryansk and Voronezh regions as well as Crimea, while battalion tactical groups were stationed on the border.

Following Mr Shoigu’s announcement, Nato said that any move towards reversing the escalation would be “important and well overdue”. It added that the Western military alliance remained vigilant.

Nato leaders have called a summit in June when Russia will be high on the agenda.

Although Russia has shrugged off the build-up as training exercises in response to “threatening” actions from Nato, it is also said to be planning to cordon off areas of the Black Sea to foreign shipping. Ukraine fears its ports could be affected.

Russia said all along that these were nothing more than military exercises.

But Moscow knew very well that its troop movements close to Ukraine and in annexed Crimea were making a lot of people very nervous: in Ukraine, Europe and in America.

And that was the point.

Moscow may well have been using the build-up of troops to send a signal to Kyiv, Brussels and, especially, to Washington that Russia is a force to be reckoned with.

US President Joe Biden took notice. Last week, he telephoned President Putin and proposed a summit. True, he also imposed a new round of sanctions over Russia’s “malign activity”. But inside Russia these were perceived as not particularly tough.

A reduction in tension, however, does not mean the end of tension. Russia’s defence minister has made it clear that “Russia is taking measures in response to threats from Nato”.

For example, Moscow is planning to block areas of the Black Sea to foreign shipping for six months.

In a state-of-the-nation address on Wednesday, President Putin warned the West against “crossing a red line”.

Speaking to reporters after the order for troops to return to base, Mr Putin said as far as bilateral relations were concerned “we are ready to welcome the president of Ukraine at any time that is convenient for him”, but in Moscow.

However, he stressed if Mr Zelensky wanted to discuss eastern Ukraine, then he should first meet the leaders there.

Conflict in eastern Ukraine broke out in 2014, after the seizure of Crimea from Ukraine. Russian-backed troops captured large areas of the Luhansk and Donetsk regions and declared them both peoples’ republics.

There have been a number of breaches of a ceasefire in the east in recent weeks. A Ukrainian soldier was fatally wounded in shelling on Thursday, in what Ukrainian forces said was a deliberate violation of the ceasefire. Some 14,000 people have died since the conflict began.