Thousands marched through the capital, Tehran, with some chanting "Death to America" after Iranian officials blamed the United States and its allies for provoking days of unrest and violence. State media reported a mix of people — families, senior citizens and students — were among Wednesday's demonstrators, but images on television were mostly of middle-aged and older men. Many held pictures of Iranian President Hassan Rouhani and waved national flags. In contrast, the majority of anti-government protesters within the past week appeared to be young men, demanding more opportunities as unemployment and the cost of living remain relatively high.Twenty-one people have been killed and 450 people arrested during the anti-government rallies, which began Thursday over the country's stagnant economy and rising costs of living but quickly developed into a broader outcry against the government. The protests have become the most powerful challenge to the Iranian government's authority since mass demonstrations in 2009.Protests took place in at least 10 cities Tuesday night, but in smaller numbers than on previous days, Los Angeles Times Tehran correspondent Ramin Mostaghim told CNN.Mojtaba, a 33-year-old Iranian who gave only his first name, told CNN that a lot of young people wanted the same lifestyles they see others having in wealthier parts of Iran as well as abroad."A lot of the kids in the smaller cities have gotten a taste for a better life through social media. They look at what they see on Instagram or Telegram and compare that to their prospects, and naturally they get angry." The government has restricted those two apps in parts of the country but said they would be accessible again on Friday. Friday will be a litmus test of how strong anti-government sentiment remains. When protests are staged in Iran, they often come after Friday prayers.

Officials in the United States and Iran have engaged in a fiery exchange of words over the unrest, triggered by President Donald Trump's tweets in support of anti-government protesters.On Wednesday, Trump sent his third tweet on the matter: "Such respect for the people of Iran as they try to take back their corrupt government. You will see great support from the United States at the appropriate time!"Nikki Haley, the US ambassador to the United Nations, doubled down on Trump's remarks on Tuesday and said that the United States was seeking emergency meetings with the UN Security Council and the Human Rights Council. "The people of Iran are crying out for freedom," Haley said. "All freedom-loving people must stand with their cause." Iran's UN mission responded Wednesday by calling Haley's comments "nauseous crocodile tears," according to a statement posted to the semiofficial Iranian Students News Agency. "The Islamic Republic of Iran strongly condemned the meddlesome remarks made by Nikki Haley and other US officials concerning the riots in the country," it said. "The remarks are all part of Washington's attempts to mask its political failures and those of its allies in the region and to take revenge on the brave people of Iran."Iran's Supreme Leader, Ayatollah Ali Khamenei, on Tuesday blamed Iran's "enemies" for stirring up unrest — suggesting they were involved in a "proxy war."Trump earlier had tweeted that the Iranian government was repressive, "brutal and corrupt" and that it was "TIME FOR CHANGE!" Leaders in Europe have offered more measured responses. Several nations in the region have begun investing in Iran since sanctions were lifted following the 2015 nuclear deal.French President Emmanuel Macron spoke with Rouhani on Tuesday and expressed concern over the violence and deaths in the past week. He called for restraint, and the two leaders agreed to postpone the French foreign minister's visit to Tehran due to the current situation.

Trump has used the anti-government protests as an opportunity to slam the Iran nuclear deal ahead of key legal deadlines looming this month, actions that may foreshadow how he plans to proceed.In mid-January, Trump will once again have to decide whether to certify Iran's compliance with the deal — a process that must occur every 90 days according to the terms of the agreement.Opinion: This moment is about Iran, not about Trump 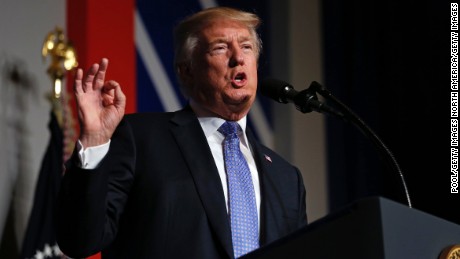 He also faces perhaps an even more significant deadline over whether to renew temporary waivers for US sanctions against Iran.Trump keeping options 'open' on Iran sanctions waiverThe renewal of those waivers — which provide relief for US sanctions not set to expire for several years — must occur every 120 days to keep the United States a party to the deal and thus not violate the accord. Iran's missile program is not in breach of its nuclear deal and will continue despite objections from the United States, Rouhani has said.