The event made for a dramatic picture of a protest in the time of coronavirus. Protesters held up Israeli flags and plain black flags to symbolize what they see as Netanyahu's attacks against the country's democratic systems. Wearing masks under the latest health guidelines, one protester held up a sign that said, "I will not be quiet because my country has changed its face." Spaced out evenly across the open space, the protest made Rabin Square appear full, even though it can hold tens of thousands of people. This week, Israel began to ease the social restrictions in place to prevent the spread of coronavirus. But even under the strictest limitations, protests were still allowed as long as they abided by the government's regulations. 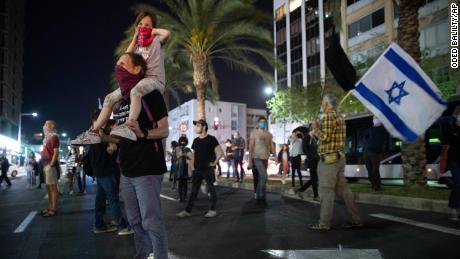 "They said that there will be an exponential growth in the number of people with corona(virus)," said organizer Shikma Schwarzmann, "but the only thing you really see growing exponentially is the number of people who are willing to stand up and protect our nation and our democracy."Speaking at the protest, Member of Parliament Yair Lapid criticized Netanyahu and Parliament Speaker Benny Gantz, until recently Lapid's political partner in the Blue and White party. Gantz broke with Lapid nearly a month ago when he agreed to serve under Netanyahu, going back on a promise that had been central to the party's campaign. The move fractured Blue and White, with Lapid taking his faction into the opposition as Gantz pursued a unity government with Netanyahu. "You don't fight corruption from within. If you're inside, you're part of it," Lapid said, in a not-so-subtle criticism of Gantz. "We are here to say that we will never give in. Too many good people have already surrendered.""That's how democracies die in the 21st century. They're not wiped out by tanks overrunning parliament. They die from within because good people were silent and weak people surrendered. From the outside everything looks exactly the same. The parliaments stand in the same place, the police band plays the same anthem, the leader hasn't changed. He looks the same, he sounds the same, but it isn't a democracy anymore.&quRead More – Source