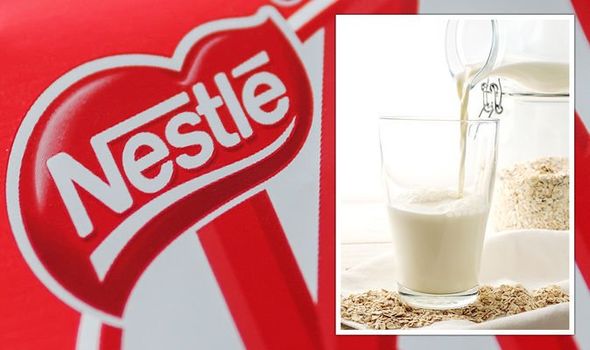 Nestlé, who makes chocolate like Milkybar, Smarties as well as KitKat and Aero, is the world’s largest producer of dairy products. The company works with hundreds of thousands of farmers around the world with millions of cows who provide the milk for its confectionery. News about the new plant-based range has caused outrage amongst livestock farmers.

Ahead of a major climate summit in Scotland next month, Nestlé chief executive Mark Schneider was in the UK to launch a range of non-dairy, plant-based alternatives to its milk and chocolate.

The company hopes that the move will reduce its greenhouse gas emissions.

It is thought that agriculture accounts for around 20 percent of the world’s greenhouse emissions, with methane from cows being a contributing factor.

Mr Schneider told BBC that the move was in response to consumers moving away from dairy products and opting to eat plant-based alternatives.

This includes milk such as oat milk or soya-based products.

He said: “We think less meat and dairy is good for the planet, but it’s also good for diet and health, and it is also a big commercial opportunity.”

However, Mr Schneider warned consumers that the alternative products would cost more than their dairy equivalents, with hope to reduce the price over time.

“The first unit is always going to be a little more expensive, this is a hump you have to get over, and then at some point economies of scale kick in making them more affordable as we have seen in electric cars,” he explained.

The chief executive added: “Some consumers are willing to pay a premium now for products that pave the way for that.”

However, livestock farmers have expressed their concerns about the plant-based alternatives, with some not convinced it will be more sustainable.

Conwy hill farmer Gareth Wyn Jones, who has a large social media following, said he would not be supporting the company this Christmas.

He said: “I will not be buying Quality streets this Christmas, or any time.”

Farmers were also not convinced that switching to milk alternatives will make them more sustainable.

One comment, from Hailey Alcock, read: “The company was literally built on the dairy industry!”

Another person, Peter Lee, said: “It won’t be sustainable, we need milk in the chocolate and we need cows on the planet!”

One user, Kim Jordan, wrote: “According to the boss they’ll be more expensive?! What is that about?”

Another person, Adam Rigg, said: “All plant-based produce is more expensive if you look around in the supermarket.”

Express.co.uk has contacted the company for comment on sustainability of its new products.

Along with the dairy-free products, the confectionery company is also working with new types of feed for cows that produce less methane per litre of milk produced.

It comes after Mr Schneider explained that the company was working hard to make sure products made it onto the shelves this winter.

A number of sectors have faced issues with supply chains due to a shortage in HGV drivers.

Mr Schneider said: “Like other businesses, we are seeing some labour shortages and some transportation issues but it’s our UK team’s top priority to work constructively with retailers to supply them.”

Asked whether Quality Street chocolate would be in the shops this year, he said: “We are working hard.”