‘My way or the highway’ approach is unacceptable: Venkaiah Naidu on Opposition’s boycott 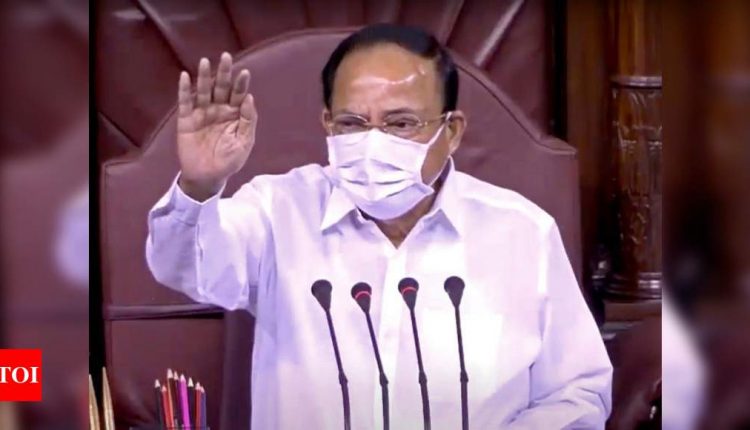 NEW DELHI: Rajya Sabha Chairman M Venkaiah Naidu on Tuesday lauded deputy chairman Harivansh for showing restraint when opposition members were agitating in the House and disapproved of the conduct of the protesting leaders, saying the "my way or the highway" approach is unacceptable.
He also appealed to the opposition members to reconsider their decision of boycotting Rajya Sabha proceedings and asked them to participate in the discussions in the House instead.
"Democracy means debate, discussion and decision, not disruption," he said, adding that the Chair wants the House to run with the full participation of members.
The chairman also said the members should not try to blame the Chair and drag it into a controversy over what has happened in the House on Sunday and this was not the first time that members have been suspended.
Naidu said he had allowed the motion moved by the government for suspension of some members over their "unruly behaviour" as he was convinced about it.
Lauding the deputy chairman for the "deft manner" in which he handled the situation, Naidu said Harivansh announced for a division of vote at least 13 times in the House and called upon the protesting opposition members to go to their seats to move their resolutions, but they did not return to their seats.
"Don't try to put the blame on the Chair or whoever was presiding over the Chair. The Deputy Chairman, I must again put it on record, acted with utmost restraint…He handled the situation in a very deft manner," he said.
"If some people feel, whether 'my way or the highway', that is not the way. I will not accept it. You have the numbers, you should stay in your seat, ask for division," he said.
Talking about the suspension of members, the Chairman said he is not happy about it "as they are our members and our countrymen", but added that this is not the first time it has happened.
"The action is on their conduct, not the person. Try to understand that. We don't have anything against any member as far as I am concerned.
"I have a long list of how people have been suspended in this House and the other House. I am not using that example to justify things," the Chairman said.
He said he has seen interviews of suspended members in a newspaper where "they all justified it (their behaviour). They not only justified it but said what was wrong in that and some of them have also confirmed that they have done it that they went to the Well. What is that?"
Naidu said some members have justified the behaviour of climbing onto the table and dancing, tearing of papers and throwing them in the House.
"I was convinced about the minister's motion and that is why I allowed it. And then, at no time, so far, has there been a division on the decision of suspension," he said, emphasising that this was done as per the rules.
On why he rejected a notice for a no-confidence motion against Deputy Chairman Harivansh, Naidu said it should have been in a form of a resolution and reiterated that 14-day prior notice was not given.
The Opposition or any member has got a right to move a resolution, but it was a 'No Confidence Motion', he said.
Naidu said Article 90 says the deputy chairman may be removed from his office by a resolution of the Council passed by a majority of all the then members of the Council, provided that no resolution for the purpose of clause shall be moved unless at least 14 days' notice has been given of the intention to move the resolution.
"There was no 14 days' prior notice. That is clear."
Naidu said at no time, the Chair, including the deputy chairman and vice-chairmen, should be dragged into this controversy.
"Putting the blame on the Chair is not fair and let everybody do some introspection," he said.
Naidu said disrupting the House is not a healthy trend.
"That is why I say — discuss, debate and then decide and not disrupt. The government proposes, the Opposition opposes and the House disposes. But you must allow the House to dispose it. You don't allow the House to function and then create this thing. That is not a healthy trend."
He appealed to the leaders of different parties "to understand the need to maintain decency and dRead More – Source