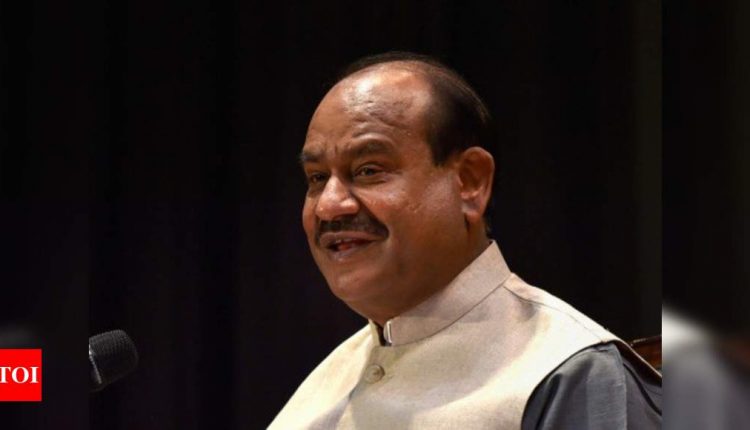 NEW DELHI: Lok Sabha Speaker Om Birla on Friday said that the lower ohuse of parliament saw 68.65 per cent average attendance of members during the monsoon session, which had 10 sittings and was held with precautions against Covid-19.
Birla said that 8,700 Covid-19 tests were done during the session in parliament, which began on September 14 amid several precautionary measures and ended on September 23.
"As it was an extraordinary session due to Covid-19, regular Covid tests were being done in the parliament," he added.
He said the debate on Covid-19 lasted for 5 hours 8 minutes and 74 MPs participated in the discussion.
Ahead of the session, AIIMS director Dr Randeep Guleria briefed MPs on Covid precautionary measures on September 13 and September 14.
For the first time in the history of Parliament, members of both houses sat in both Rajya Sabha and Lok Sabha including galleries during the proceedings to maintain social distancing.
The Speaker told the media that the session saw several achievements though it as full of challenges amid conditions created by Covid-19.
"India's democracy is strong and people have faith in it. Since 1952, voters' percentage has increased as they exhibited faith in democracy. Many countries held their Parliament virtually. The kind of support we received from all political parties and government, we were able to finish more work compared to the time we had. We saw a good percentage of MPs present in Parliament," added the Speaker.
On the first day of the session, 369 MPs attended the Lok Sabha. The maximum number of MPs were present on September 22 when 383 MPs attended the house, he said.
The average attendance was 370 which translates into 68.65 per cent.
The monsoon session was adjourned sine die on September 23 after several opposition parties during the meeting of Business Advisory Committee (BAC) suggested curtailment of session due to Covid-19 spread.
Lok Sabha passed 25 bills and 16 were introduced. Eleven bills related to ordinances brought by the government. The bills were cleared after discussion that lasted 35 hours 24 minutes.
The productivity for 10 days, including the House sittings on Saturday and Sunday, was 167 per cent. The House worked for 60 hours against the proposed 37 hours.
Sixty-eight per cent time was used for legislative business whereas 32 per cent was allocated for other things like the zero hour.
During Zero hour, 88 MPs raised issues of public importance. The House devoted 10 hours 23 minutes for matters of public importance and 370 MPs spoke during the zero hour.
A total of 183 issues were raised under rule 377.
The House spent 5 hours and 36 minutes discussing two farm bills – The Farmers' Produce Trade and Commerce (Promotion and Facilitation) Bill, 2020 and the Farmers (Empowerment and Protection) Agreement on Price Assurance and Farm Services Bill, 2020. Forty-four MPs took part in the discussion.
Other bills passed include the Essential Commodities Act, 2020, National Defence University Bill, 2020 and Epidemic Diseased (Amendment) Bill, 2020.
The Speaker said that MPs did not press want division on bills. "We would have done that if asked for," he said.
In a first, an app was also used to register attendance. On September 20, 59 members registered themselves through the app.Read More – Source

European Union, India step up cooperation in research and innovation on green projects

Decision on holding Bihar polls amid pandemic a leap of faith, not leap in the dark: CEC Arora