India, China agree not to further escalate border situation but no breakthrough on disengagement in military talks 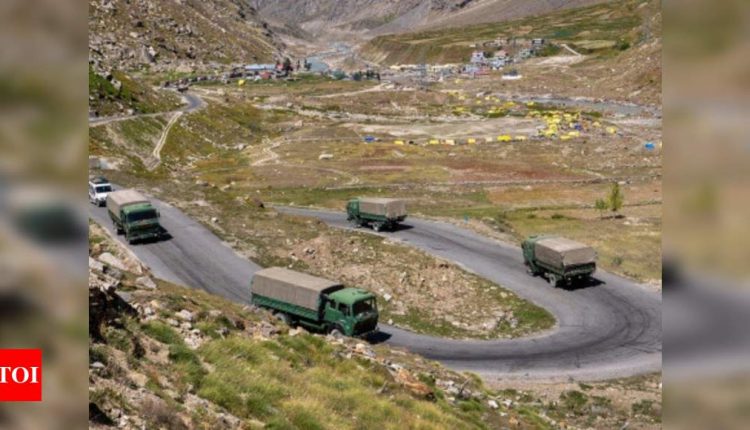 NEW DELHI: India and China have agreed not to further escalate the border situation through a series of measures, which significantly includes not sending more troops to forward areas, but a tangible breakthrough on de-escalation eluded the marathon military commander-level talks held on Monday.
The test of the joint statement issued on Tuesday will lie in actual Chinese actions in disengaging and de-escalating along the Line of Actual Control (LAC) in eastern Ladakh, in accordance with the "consensus" reached between foreign minister S Jaishankar and his Chinese counterpart Wang Yi in Moscow on September 10.
The 14-hour long dialogue on Monday, between the delegations led by 14 Corps commander Lt-General Harinder Singh and South Xinjiang Military District chief Major General Liu Lin, did not lead to any forward movement in defusing the almost five-month long troop confrontation, said sources.
But the joint statement signaled a more positive outcome, with the two countries agreeing to “earnestly implement the important consensus” reached earlier between PM Narendra Modi and President Xi Jinping to maintain peace along the LAC.
The Jaishankar-Wang talks had also agreed to both sides taking actions to "quickly disengage" in the high-altitude region, where both sides have amassed well over 50,000 soldiers each as well as tanks, armoured vehicles, howitzers, surface-to-air missiles systems.
As per the joint statement on Tuesday, the two armies will also refrain from unilaterally changing the situation on the ground and taking any actions that may complicate the situation. They will also strengthen communication between the local commanders to avoid “misunderstandings and misjudgments”.
The statement seems to signal that the current standstill may continue, with senior government sources hinting that "apex leadership" level discussions may be needed to break the logjam.
The two sides agreed to hold the 7th round of military commander-level meeting as soon as possible, take practical measures to properly solve problems on the ground, and jointly safeguard peace and tranquility in the border area.
Sources, however, said there was “hardly any meeting ground” on the actual troop disengagement and de-escalation during the military talks, which included diplomatic representation from India for the first time. The Peoples Liberation Army (PLA), in fact, has assiduously used the cover of diplomatic and military talks to crank up its troop and logistics build-up in the region.
At the military talks, India pressed for a concrete roadmap for “complete de-escalation” at the immediate face-off sites as well as the “depth areas” along the entire frontier in eastern Ladakh. China, in turn, kept insisting on the withdrawal of Indian troops from the heights on the southern bank of Pangong Tso-Chushul area.
“There was a mismatch between the rival proposals. But then, it is a complex issue, which will need sustained dialogue to arrive at a mutually-acceptable plan. We will not lower our guard,” said a source.
The PLA remains upset at the way Indian troops preemptively occupied multiple tactical heights on the ridge line stretching from Thakung on the south bank of Pangong Tso to Gurung Hill, Spanggur Gap, Magar Hill, Mukhpari, Rezang La and Reqin La (Rechin mountain pass) on August 29-30.
These heights, which weRead More – Source