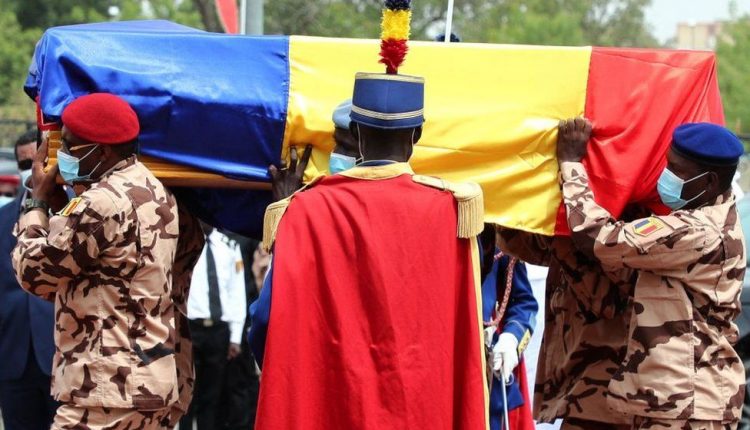 Thousands of Chadians attended the state funeral of long-serving President Idriss Déby after he was killed earlier this week during a clash with rebels.

Among the foreign leaders there was France’s President Emmanuel Macron, for whom Chad is a key ally in the fight against jihadists in region.

“You gave your life for Chad in defence of its citizens.”

He told attendees at N’Djamena packed main square, la Place de la Nation: “We will not let anybody put into question or threaten today or tomorrow Chad’s stability and territorial integrity.”

The ceremony also saw a military march-past and a speech by Déby’s son, Gen Mahamat “Kaka” Déby Itno, who the army has named as the country’s new leader.

He vowed to “stay loyal to the memory” of his father and pledged to continue the legacy of “dialogue, forgiveness, peace, unity” that the late president was “admired for”.

The army says President Déby died in a battle with a dissident army rebel group, called Fact, in the country’s north on Tuesday.

Other visiting heads of state at Friday’s ceremony included the leaders of Guinea, Mali, Mauritania and Nigeria – who all ignored warnings from the rebels that they should not attend for security reasons.

After the military honours and speeches, prayers were said at the Grand Mosque of N’Djamena.

Then Mr Déby’s remains were being flown to Amdjarass, a small village next to his hometown of Berdoba, more than 1,000 km (600 miles) from the capital, near the Sudanese border.

President Déby was a key player in security strategy in the Sahel region – and Chad is reputed for having one of the best-trained and best-equipped armies in West Africa, which is battling militants link to both al-Qaeda and the Islamic State group.

A military council led by his son, Gen Mahamat Déby Itno took power after his death.

The BBC’s Lalla Sy says he only has partial support of the army, however he is backed by former colonial ruler France, which has a large military base in N’Djamena.

On Thursday French Foreign Minister Jean-Yves Le Drian appeared to back the military takeover, by saying the immediate priority in Chad was to ensure the country’s stability amid “exceptional circumstances”.

Gen Déby, 37, has said the army will hold democratic elections in 18 months, but opposition leaders have condemned his succession as a “coup” and an army general said many officers were opposed to the transition. A general strike has been called in protest.

Fact rebels also reject it but have called a temporary ceasefire while Friday’s funeral takes place.

In a statement on Friday, the rebels said their command centre had been bombed two days earlier in an attempt to kill their leader. Its location, and details of any casualties, were not specified.

Chad’s president was one of Africa’s longest-serving rulers and a close ally of the Western powers, especially France.

The support given to president Idriss Déby – officially aimed at fighting against rebel groups and Islamist militants in West and Central Africa – consisted of intelligence for the Chadian army, aerial surveillance, and even protecting strategic points for the Chadian army.

The presence of a foreign army is never well received by the local population, especially when they are soldiers of the former colonial power.

The idea that France deliberately maintains a certain chaos in the region to defend its interests is believed by many.

But divisions within Chad’s military – who only partially support the new leader while rebels reject him outright – raises fears of instability as a fragile transition gets underway.