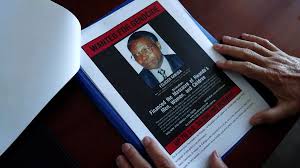 France’s top appeals court ruled Wednesday that alleged Rwandan genocide financier Félicien Kabuga should be transferred to a UN tribunal in Tanzania to stand trial on charges of genocide and crimes against humanity.

Kabuga, arrested near Paris in May after 25 years on the run, has asked to face justice in France. But the Court of Cassation ruled there was no legal or medical obstacle to implementing an international warrant for Kabuga’s transfer to the Arusha-based tribunal.

Kabuga, 87, is accused of bankrolling and importing huge numbers of machetes for ethnic Hutu militias who killed some hundreds of thousands of Tutsis and moderate Hutus in Rwanda during a 100-day period in 1994.

He has denounced the charges, including genocide and incitement to commit genocide, as “lies”.

In a statement, France’s Cour de Cassation said it “considers that the investigating chamber was able to consider correctly that there was no legal or medical obstacle to the execution of the arrest warrant transfer order to the United Nations detention centre in Arusha, Tanzania.”

In their submission, his lawyers argued that Kabuga’s health was too frail for him to be transferred to Tanzania, particularly during a dangerous pandemic.

They also argued that French law violated the constitution by failing to provide for a thorough examination of international arrest warrants.

The Cour de Cassation’s ruling upholds one by a lower court on June 3 that Kabuga be extradited, ruling that his health was not “incompatible” with a transfer to a UN tribunal.