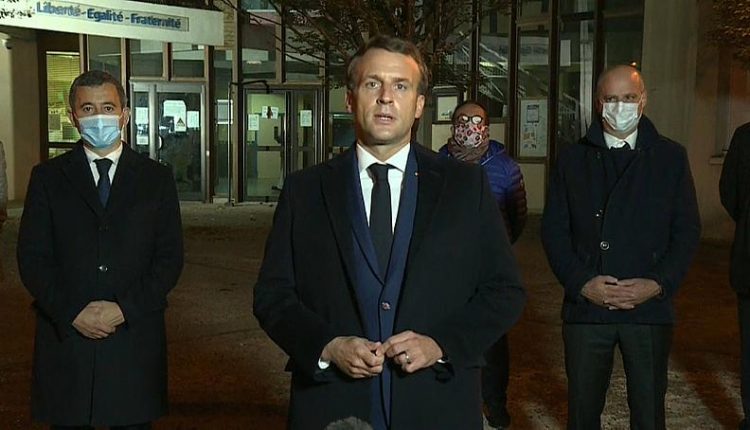 A teacher beheaded on a street near Paris on Friday afternoon has been named as Samuel Paty by French Education MinisterJean-Michel Blanquer.

The suspected killer, who was armed with a knife and a plastic pellet gun, was later shot dead by officers in a nearby town, police said.

President Emmanuel Macron called it an “assassination” and an “Islamist terrorist attack”.

Here’s what we know about the attack so far:

Who was the victim?

Paty, a 47-year-old history and geography teacher, was decapitated near the school in the commune of Conflans Saint-Honorine, northwest of the French capital, at around 5 pm local time.

Police told the AFP news agency that he had hosted a class discussion with secondary school students about cartoons of Islam’s Prophet Muhammad.

Some Muslim parents said they had complained to the school and French media reported Paty had received a number of threats in the wake of the class.

Blanquer said the school had taken “appropriate” steps in response to the complaints in setting up measures that both “supported the teacher and opened up a dialogue with parents”.

The minister added he would prepare a pedagogical “framework” on how to address the attack with students when they returned to school after half term. He said a minute’s silence would be organised.

He said afterwards: “One of our citizens was assassinated tonight because he was a teacher, because he taught students about the liberty of expression, the liberty to believe or not to believe.

Who was the alleged perpetrator?

His alleged attacker was reported to be 18 years old, of Chechen origin and born in Moscow.

Officials said he was shot dead in the neighbouring town of Éragny after he acted in a threatening manner and failed to respond to an order to put down his weapons.

A picture of the decapitated teacher was posted on social media immediately after the attack on an account that belonged to the assailant shot by police, France’s national anti-terror prosecutor said on Saturday.

What’s the background to this attack?

The incident came as the French government works on a bill to address Islamist radicals who authorities claim are creating a “parallel society outside the values of the French Republic”.

This marks the second terrorism-related incident since a trial began into the January 2015 massacre at the satirical magazine Charlie Hebdo, which had published cartoons depicting Muhammad.

The magazine republished them this year as the trial got underway.

Three weeks ago, an 18-year-old from Pakistan was arrested after stabbing two people outside the former Charlie Hebdo offices.

He told police he was upset about the publication of the caricatures. His victims suffered non-life-threatening injuries.

How have people reacted to the incident?

Charlie Hebdo tweeted on Friday: “Intolerance just reached a new threshold and seems to stop at nothing to impose terror in our country.”

European Commission President Ursula von der Leyen on Saturday expressed her condolences to the victim’s family and said her “thoughts were going out to teachers in France and throughout Europe” after the attack.

“Without them (teachers), there are no citizens. Without them, there is no democracy,” she added.

The Assembly of Chechens in Europe, which is based in Strasbourg, France, said in a statement: “Like all French people our community is horrified by this incident.”