Being a soldier, he discovered, involved a lot more than firing a gun. Over a year ago, he says he was forced by Houthi rebels to take up arms on the frontlines of Yemen's civil war."I saw the people beside me get killed," he says. Seated next to his mother and surrounded by eight siblings, he recounts his shocking experiences, which included a serious wound to his leg. "They would get a bullet (in the head) or in the chest. I was very scared. When the projectile hit me, I thought I was dying. I was overcome by fear and anxiety. Even now, I still feel the same way."During the shelling that caused his leg injury he says he was at the front. His fellow child soldiers were crying out. "I sat next to them and cried too," he recalls. He couldn't think of anything else, he says, not even his favorite animals.Since March 2015, the United Nations has verified 2,369 cases of child recruitment and use of children in combat in Yemen, Meritxell Relano, UNICEF resident representative in Yemen, told CNN. The UN says it faced various challenges to monitoring and believes the number to be much higher.Yemeni officials in the Western-backed government in the South believe there are more than 6,000 child soldiers across the country, and suspect that as many as 20,000 children may need help with war rehabilitation. The country has been embroiled in crisis since 2014, when Iranian-backed Houthi rebels took over the capital Sanaa and other major cities. A coalition led by Saudi Arabia has waged a military campaign to prop up the internationally recognized government of Abdu Rabu Mansour Hadi and fight the rebels since March 2015, mainly through airstrikes and an ongoing air, land and sea blockade. 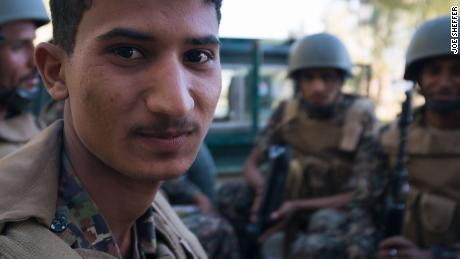 The war has caused international outcry. Over 8,600 people have died and nearly 50,000 have been injured since March 2015, according to the World Health Organization. The country also faces one of the world's worst cholera outbreaks in modern history. Last December, the UN's Humanitarian Coordinator for Yemen said he was "deeply disturbed" by mounting civilian casualties and said it was proof of the "complete disregard for human life that all parties, including the Saudi-led coalition, continue to show in this absurd war."

The UN once dubbed Yemen's war "a children's crisis," and argued that young people were bearing the brunt of the conflict's humanitarian disasters. The Saudi-led coalition has been blamed by the UN for being behind most of the Yemen war's child casualties. The Secretary General's Annual Report on Children and Armed Conflict says the Saudi-led coalition's bombing of rebels in Yemen led to "the killing and maiming of children, with 683 child casualties."Saudi Arabia said the report is filled with "inaccurate and misleading information." The kingdom's UN Ambassador Abdallah Y. Al-Mouallimi said his nation exercised "the maximum degree of care and precaution to avoid civilian harm."When it comes to child soldiers, Houthis shoulder most of the blame, the UN said in a report last year. Houthis were behind 359 out of 517 verified cases of child combat recruitment in 2016, while 76 children were recruited by pro-government armed groups known as the Popular Resistance and the coalition-backed Yemeni army, according to the report. Al Qaeda and its affiliates were behind 56 recruitment cases. 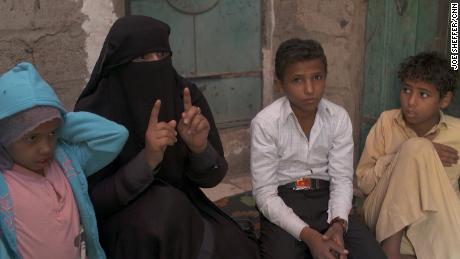 A Houthi official has called reports of the group's enlistment of child soldiers "exaggerated," and claims that official leadership is trying to counter the practice."We are against child soldiers and our supreme leader Abdul-Malik al-Houthi has continuously given us orders to not allow children to fight," a senior Houthi official and member of the group's political council, tells CNN."At times, and without knowledge of our military leadership, a parent accompanies his young son with him to the battleground. We oppose this and force them to go home. We have returned hundreds of such cases and will continue to do so," he adds.Younis says his family is part of the pro-government Popular Resistance. When the Houthis came to arrest his father in Amran, north of Sanaa, he crouched on their house's rooftop firing a machine gun to scare them away. He says he kept them away for long enough to secure his father's escape. 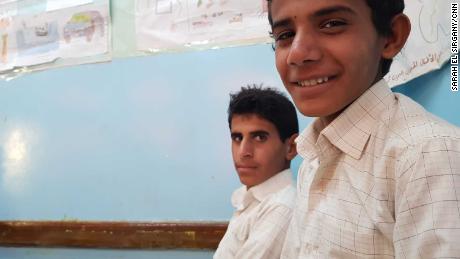 Children like Younis can be spotted on roads connecting Yemeni towns, wielding rifles as they trudge through the desert. The problem of Yemen's child soldiers precedes this civil war, and spans its entire political spectrum.According to the UN, Yemen's child soldiers are as young as 11.In addition to engaging in combat, children guard checkpoints and buildings, patrol areas and act as porters, the same UN report said.

At a Saudi-funded rehabilitation center for child soldiers in the desert city of Marib, Younis' classmates — predominantly ex-Houthi soldiers — talk about their roles in battle.CNN was in Yemen with the country's information minister and the government army's regional commander. Their coalition partners, Saudi Arabia and the United Arab Emirates, facilitated the trip, including a visit to the Saudi-funded rehabilitation center.Saleh draws a sketch of a pickup truck carrying a Katyusha rocket. He points to the driver in the drawing. "That's me," he says. At 13, he transported the rocket launchers for Houthis to the frontline.Naji, 13, says the rebels had him dragging dead bodies from the field. "One day, I looked at the body and it was my uncle. I cried. I didn't know what to do. I couldn't pull his body out," Naji recalls. 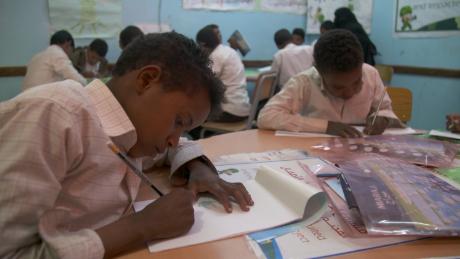 At the playground, the kids gather around a camera tripod and snicker, as though sharing an inside joke. "This looks like the rocket launchers," one of them says.Basheer and Abdullah, 13, use it as a prop in a story that they are eager to tell — of their friendship and escape from the battlefield.They stand on either side of the tripod, describing how they used to fire Katyusha rockets for the Houthis. The task of launching rockets came as part of their rise in the ranks toward the end of their three-year stint as soldiers, they say. Before that, they were messengers and made tea for soldiers.An animated Basheer tells the story: He would load the launcher with ammunition and Abdullah would fire it. The Houthis told them "infidels" were on the other side of the frontlines, they recall. One day, the missile backfired, burning Abdullah's right leg. Their families took this as an opportunity to pull them off the battlefield. 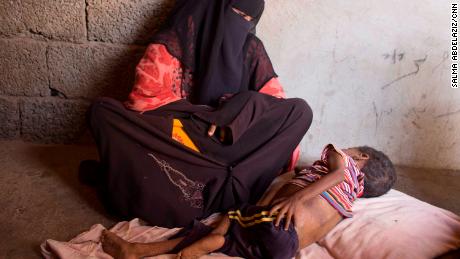 Basheer wears a wide smile as he puts his arm around Abdullah's shoulders. They are proud of their enduring friendship, which preceded the war. Their friendship appears to be the bedrock of their recovery. Basheer blows a red balloon as he hugs the shier Abdullah."The Houthis depend on the children because they are impressionable. And they can be easily coaxed with weapons, money and even food and water. They also take advantage of their child enthusiasm," Abdel-Rahman El-Qotby, director of the Saudi-funded Marib rehab center, said.According to a 2017 Amnesty International report, the Houthis promise monetary incentives to the families of child soldiers, pledging monthly pensions of around $80 to $120 if the child were to die. Houthis will print memorial posters for deceased child soldiers, the report says. 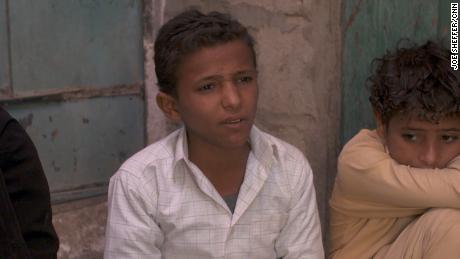 According to the UN, child recruits to the pro-government Popular Resistance were often motivated by a desire to secure income for their families.A rise in poverty and the near-collapse of the education system have enabled recruitment. An estimated two million children are out of school in Yemen, where persistent fighting has left more than 1,600 schools partially or completely destroyed, according to UNICEF. El-Qotby says Houthis draw a lot of those children into their ranks by taking them to religious classes and teaching them jihadi chants to heighten their enthusiasm. After the religious inculcation, he says, the children are given arms. At the rehab center, the children offer up details of their escape from the battlefield. As with Younis, most managed to get away after an injury or while escorting an injured friend away from the front. Younis defected while he was recovering from his leg wound at the hospital. He made his way to Marib, a city just outside Houthi-held Yemen, dodging Houthi fighters and other armed groups along the way, he says. In that desert town, he reunited with his family, who had taken refuge in a cinderblock house.Marib has seen its population swell from 400,000 to 1.8 million over the past two years thanks to an influx of refugees from Houthi-controlled areas, officials say. Younis' mother Samira says the family is seven months behind on the rent and facing eviction.

Nightmares of a child soldier

The rehab program Younis enrolled in is still in its infancy — it has treated nearly 200 teenagers in four centers across the country.Recovering from the trauma is slow. Nightmares still haunt Younis and sometimes spill into reality. "One night at school I could see a face on the wall looking at me," he recalls. That night he thought someone was going to kill his friends in a nearby room and then come for him. He locked himself in his room. 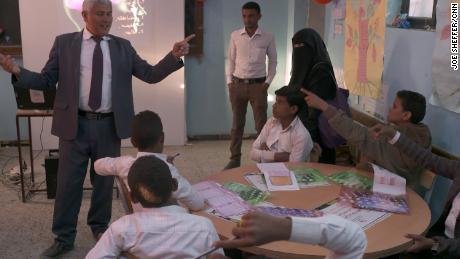 Younis says he has stopped smoking and chewing Qat, a commonly used leafy amphetemine-like drug especially popular among soldiers. He is back in school.His mother Samira says Younis has come back "politer and with better manners.""He used to wake up at night startled, screaming 'The Houthis, the Houthis. They are coming to take me,'" Samira says. "I would go to him, tell him to say a prayer. 'You are here with me, not with them. God has saved you from them and brought you to us.'"