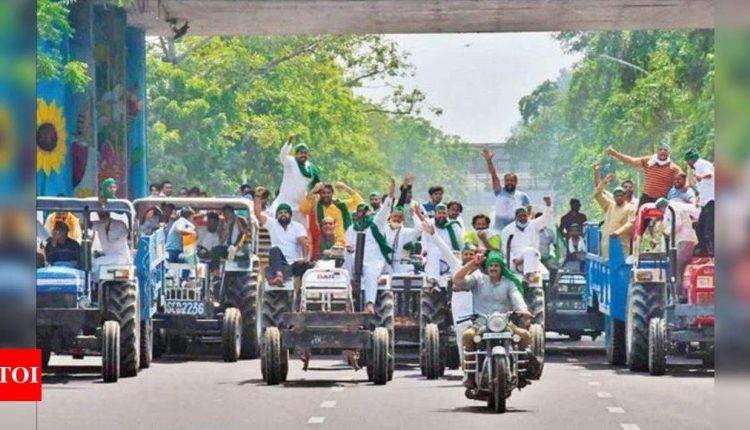 NEW DELHI: Even as some farm organisations and opposition-ruled states like Punjab and Maharashtra said they will oppose implementation of the new farm laws, PM Narendra Modi on Friday stuck to his guns, asserting that the opposition has launched a disinformation campaign against welfare measures that have for decades remained mere slogans.
Addressing BJP workers, the PM also backed the new labour codes, saying more than 50 crore workers in the organised and unorganised sectors will benefit from the legislations that have replaced a complex set of rules and laws and will also ensure timely payment of wages.
Seeking to counter claims that the minimum support price system was being done away with, Modi said the Centre had revised MSP handsomely and added that hurdles that prevented farmers from selling their produce freely had now been dismantled. The MSP was fixed at 1.5 times of cost and Rs 1 lakh crore have been transferred to bank accounts of farmers under PM-Kisan.
The PMs remarks reflected the sense of satisfaction in government that the Covid-impacted monsoon session of Parliament had seen the passage of crucial farm and labour reforms the Centre believes are central to its economic and welfare agenda. The labour reforms are intended to give teeth to measures like reduced corporate tax to make India an attractive business destination. Farm laws are aimed at loosening the middleman nexus in agriculture and provide farmers options like contract farming as an alternative to increase incomes.
Modi asked party workers to reach out to people and explain in simple words about how the legislations would impact their lives positively. “After Independence, several slogans were raised in the name of farmers and workers, manifestos were written making promises, which proved to be hollow. Those who always lied to farmers are obsessed with their own political interests and have launched a disinformation campaign to misguide the farmers,” he said.
He recalled the times when Jan Sangh stalwart Deen Dayal Upadhyay spoke about “hollowness” of slogans about welfare of the poor and oppressed. He said opposition parties are spreading rumours while in fact small and marginal farmers, who constitute 85% of the peasant community, will benefit the most from these reforms. They will have an option to sell their produce outside the current agriculture mandis for a better price. “Several farmers unions have hailed the legislations endorsing the government move,” he added.
“Similarly workers were made to suffer due to numerous legal complications. The changes in the labour laws will be beneficial for more than 50 crore workers of the country,” Modi said. He said the government has tried to make life easier for the workers by replacing dozens of labour laws with the four labour codes. Modi also said his government has been very clear that it should not excessively interfere in the lives of those who do not need the government. “The goveRead More – Source