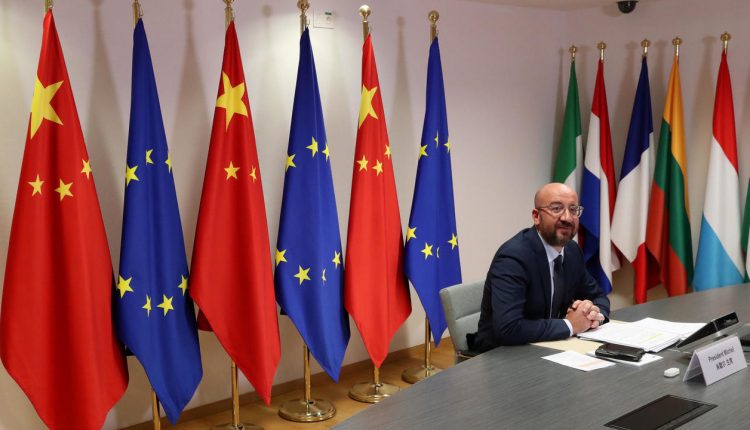 Chinese officials, EU chiefs Charles Michel and Ursula von der Leyen and German Chancellor Angela Merkel will hold a video-conference to replace a full summit with all 27 EU leaders cancelled because of coronavirus.

China says an investment deal — already seven years in the making — can be agreed this year, but EU officials warn obstacles remain and insist they will not swallow unfavourable terms simply to cut a deal.

"Even if there is a political objective to accelerate negotiations and conclude them by the end of the year, we will have this only if it is something worth having," an EU official said.

Brussels says "significant progress" has been made in talks since a similar video summit in June, and officials hope to agree a roadmap to a deal by the end of the year — they also want Beijing to improve market access for European companies.

"The EU must define its own interests, and must be strong and independent of both China and the United States," French Finance Minister Bruno Le Maire told the German weekly Welt am Sonntag.

Brussels wants to reinforce respect for intellectual property, to end obligations to transfer technology and to reduce subsidies for Chinese public enterprises.

No major breakthrough is expected on Monday but the EU side hopes to persuade Xi to give fresh political impetus to the talks — and to allow his negotiators more room to compromise.

The meeting comes as ties between China and the US deteriorate, with both sides locked in fierce recriminations over trade disputes, human rights and the origins of the coronavirus pandemic.

Washington and Beijing have imposed curbs on each other's diplomats, after another tit-for-tat move in July when the two governments ordered the closure of consulates in Houston and Chengdu.

Both sides have sought to enlist the EU in their spat and, during a visit to Brussels by US Secretary of State Mike Pompeo in June, EU diplomatic chief Josep Borrell mooted talks to forge a common transatlantic front against China.

But little progress has been made on this initiative and broadly Brussels has preferred a middle path, treating Beijing as both a potential partner and a "systemic rival".

"The EU stands firm on its interests and values but also wants to cooperate with China," a senior EU official said.

The EU will press Xi on Hong Kong, where Beijing has imposed a controversial new security law — a move denounced by the West as an assault on the city&#039Read More – Source