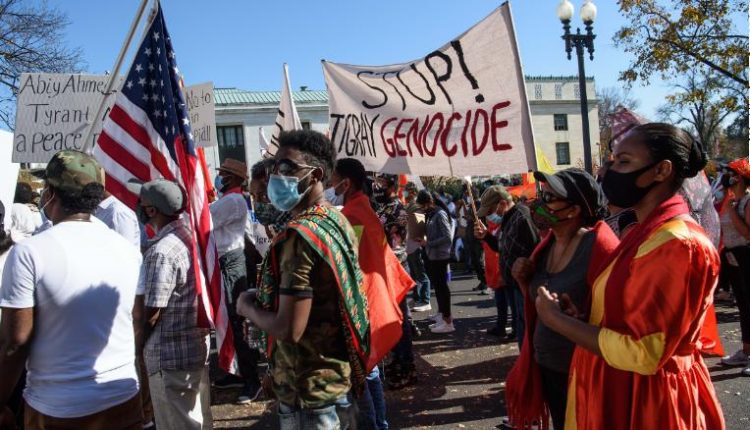 Ethiopian Prime Minister Abiy Ahmed’s government said on Monday it had captured another town in the northern Tigray region after nearly two weeks of fighting in a conflict already spilling into Eritrea and destabilizing the wider Horn of Africa.

Hundreds have died, at least 20,000 refugees have fled to Sudan and there have been reports of atrocities since Abiy ordered air strikes and a ground offensive against Tigray’s rulers for defying his authority.

The conflict could jeopardize a recent economic opening, stir up ethnic bloodshed elsewhere around Africa’s second most populous nation, and tarnish the reputation of Abiy who won a Nobel Peace Prize last year for a peace pact with Eritrea.

The Tigray People’s Liberation Front (TPLF), which governs the region of more than 5 million people, has accused Eritrea of sending tanks and thousands of soldiers over the border to support Ethiopian federal troops. Asmara denies that.
Tigray forces fired rockets into Eritrea at the weekend.

A task force set up by Abiy to handle the government’s response to the crisis, said troops had “liberated” the town of Alamata from the TPLF.
“They fled, taking along around 10,000 prisoners,” it added, without specifying where those were from.
With communications mainly down and media barred, Reuters could not independently verify assertions made by all sides.

There was no immediate comment from Tigray’s leaders on events in Alamata, near the border with Amhara state, about 120 km (75 miles) from Tigray’s capital Mekelle.

TPLF leader Debretsion Gebremichael urged the United Nations and African Union to condemn Ethiopia’s federal troops, accusing them of using of high-tech weaponry including drones in attacks he said smashed a dam and a sugar factory.
“Abiy Ahmed is waging this war on the people of Tigray and he is responsible for the purposeful infliction of human suffering on the people and destruction of major infrastructure projects,” he said.

“We are not the initiators of this conflict and it is evident that Abiy Ahmed conducted this war as an attempt to consolidate his personal power,” heRead from source added, warning that Ethiopia could become a failed state or disintegrate.
Fighting spreads

The fighting has spread beyond Tigray into Amhara, whose local forces are allied with Abiy’s forces. On Friday, rockets were fired at two airports in Amhara in what the TPLF said was retaliation for government air strikes.

Tigray leaders accuse Abiy, who is from the largest Oromo ethnic group and Africa’s youngest leader, of persecuting them and purging them from government and security forces over the last two years. He says they rose up against him by attacking a military base.
Amnesty International has denounced the killing of scores and possibly hundreds of civilian laborers in a massacre that both sides have blamed on each other.

The Ethiopian National Defense Force (ENDF) has around 140,000 personnel and plenty of experience from fighting Islamist militants in Somalia, rebel groups in border regions and a two-decade border standoff with Eritrea.

But many senior officers were Tigrayan, much of its most powerful weaponry is there and the TPLF has seized the powerful Northern Command’s headquarters in Mekelle.

There are reports of defections of Tigrayan members of the ENDF. And the TPLF itself has a formidable history, spearheading the rebel march to Addis Ababa that ousted a Marxist dictatorship in 1991 and bearing the brunt of a 1998-2000 war with Eritrea that killed hundreds of thousands.

Abiy once fought alongside the Tigrayans and was a partner in government with them until 2018 when he took office, winning early plaudits for pursuing peace with Eritrea, starting to liberalize the economy and opening a repressive political system.

Good news on the vaccine front shows ‘light at the end of the tunnel.’ For now, the Covid crisis is unabated