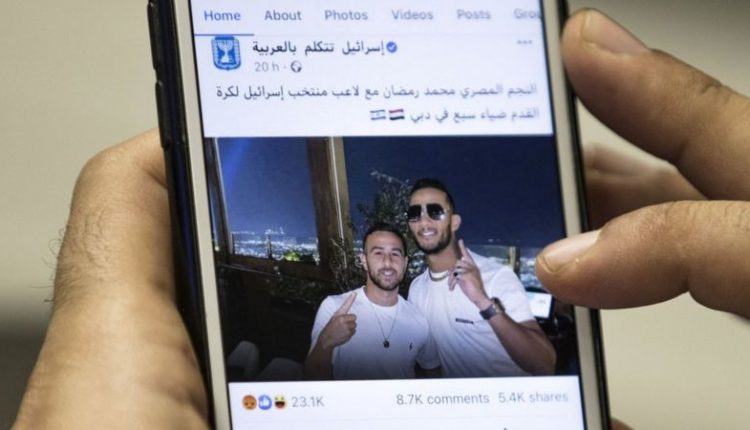 A prominent Egyptian singer who was photographed posing with two Israeli celebrities at a party in Dubai faces a court hearing in Egypt next month.

A lawyer has filed a suit accusing Mohamed Ramadan of “insulting the Egyptian people” with the images, which were condemned by many Arabs online after Israel’s government shared them.

The syndicate of Egyptian artists also said it was suspending his membership.

The 32-year-old insisted he had not known the celebrities’ nationalities.

Egypt and Israel fought five wars before they signed a peace treaty in 1979. However, relations between the neighbours are still at times tense.

In recent months, the United Arab Emirates and Bahrain have signed agreements with Israel to normalise relations. Sudan has also said it will do so.

On Saturday, the official Arabic Facebook and Twitter pages of the State of Israel shared a photo of Ramadan hugging Israeli singer Omer Adam at an event in a rooftop bar in Dubai.

The image was credited to an Emirati journalist and captioned: “Art always brings us together.”

Another post featured a photo of Ramadan with Israeli footballer Diaa Saba.

The photos sparked outrage on social media, with many accusing him of “betraying” the Palestinians. The hashtag “Mohamed Ramadan is a Zionist” trended on Twitter.

Addressing Ramadan, he added: “Did you not know that there is an Arab population that was displaced from their lands and that their lands were occupied and their sanctities desecrated.”

Ramadan rejected the criticism in a tweet on Sunday and accused critics of trying to “stop my success and popularity”.

“I don’t ask which country the person who wants to take a photo with me comes from unless they say themselves,” he wrote.

He also shared a video of him posing with a Palestinian man at what appeared to be the same venue in Dubai, in which he said he had extended “my greetings to the brotherly Palestinian people”.

Ramadan’s defence of his actions did not stop Egyptian lawyer Tareq Mahmoud filing a lawsuit, which will be heard by a court in Cairo on 19 December.

The Union of Artistic Syndicates also said on Facebook that it was suspending Ramadan’s membership until he was questioned “at the latest in the first week of December”.

In response, Ramadan said he “respected” the union’s decision, stressing that if he had known Omer Adam was Israeli he “would have rejected taking a picture with him”.