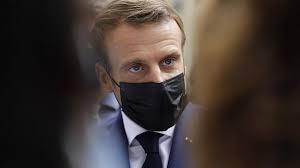 France is to reimpose a ‘state of health emergency’ in a bid to tackle its worsening coronavirus epidemic.

A “curfew” will be introduced in and around Paris and eight other main cities from this weekend, from 9pm until 6am in the morning.

It will kick-in from midnight on October 17 and will last for four weeks. The new measures come four months after the last lockdown was phased out as infections decreased.

The restrictions, already outlined by the government, were confirmed by President Emmanuel Macron in a televised address to the nation on Wednesday evening. The month-long period could be extended to six weeks, but this would require the approval of parliament.

The eight metropolitan areas affected by the new measures apart from the Paris region are in and around Grenoble, Lille, Lyon, Aix-Marseille, Montpellier, Rouen, St Etienne and Toulouse. Altogether some 19 million people are affected.

“In view of its spread on the national territory, the COVID-19 epidemic constitutes a health disaster endangering, by its nature and its seriousness, the health of the population. It justifies that the state of health emergency be declared so that measures strictly proportional to the health risks incurred and appropriate to the circumstances of time and place can be taken,” a government report read.

President Macron denied on TV that France had lost control of the virus. But he said that the resurgence in the number of COVID-19 cases was putting the health service under great pressure, describing the situation as “worrying”.

There were now an average of 20,000 new cases a day, he said, with some 200 more people with the virus being taken into intensive care in hospital. Coronavirus has killed some 32,000 people in France so far.

The president added that 32% of cases in intensive care were taken up with coronavirus patients.

He said that the aim of the new restrictions was to stop the spread of the virus, protecting the vulnerable, the health service and its workers.

Macron said to impose a national lockdown would be “disproportionate”. However, fines of €135 would be imposed on people violating the curfew. Respect for the rules was important to avoid even stricter measures in two or three weeks’ time.

There would be no new restrictions on public transport or travel between different regions, and people would be free to go on holiday, the president said. He recommended that private gatherings should respect the principle of having no more than six people at a table, as is the guide for restaurants.

By law, France cannot put a limit on the number of people meeting for private gatherings, unlike some other European countries such as the UK which has imposed such restrictions.

Emmanuel Macron promised extra support measures for sectors of the economy affected by the curfews: such as restaurants, theatres, cinemas and public events.

France is one of several countries in Europe to impose restrictions in the face of a second wave of COVID-19 cases across the continent.