Residents still reeling from that devastating explosion were told by Beirut Governor Marwan Abboud to stay clear of the port area "for their safety" and to allow firefighters to perform their duties unhindered, state news agency NNA reported.The cause of the fire was not immediately clear, but the Lebanese army said in a statement that it began at a warehouse where oil and tires are kept in the port's duty-free market. No casualties have been reported. At the scene, a warehouse engulfed in flames sent plumes of black smoke rising into the sky. Many Beirut residents sharing videos on social media expressed their dismay that yet another disaster was unfolding in their city, saying that the scenes were all too familiar.Efforts are underway to extinguish the fire, which appears to have spread to adjacent warehouses. Brigadier General Raymond Khattar, director general of the Lebanese Civil Defense, denied the fire was spreading, telling NNA that the blaze had been "completely surrounded" by Civil Defense and fire brigade personnel working on the ground. Lebanese Air Force helicopters were also dousing the flames from above.Khattar added that the materials at the site, which include rubber and oils, were highly flammable and required "exceptional handling" and "time" to be completely extinguished.The Civil Defense has appealed to owners of private water tanks in the area to help with the effort. As firefighters worked to bring the blaze under control, all roads leading to the port were blocked off and traffic diverted to alternative routes, according to NNA.Standing on a sidewalk near the port, passersby looked on at the fire, some in stunned silence, others irate."What can one say? There's no hope. The country's on fire," said onlooker Ismail Abdu, 31. 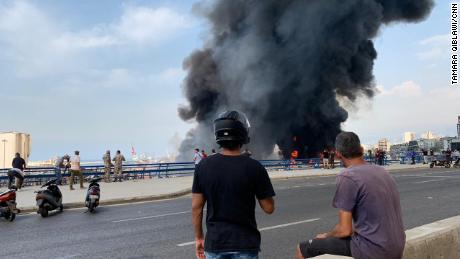 'What is this? An explosion, one more time?'

Beirut is still picking up the pieces after last month's blast.The explosion of nearly 3,000 tons of ammonium nitrate tore through the capital on August 4, killing 190 people, injuring more than 6,000, and leaving more than 300,000 displaced from their homes. It destroyed much of Beirut's eastern coastal area.Just last week, rescuers were searching to find a survivor under a mountain of rubble. After an emotionally charged three days, the search was called off, extinguishing hopes of locating a missing person. "This is a disaster … We are working here in Beirut every day to help people. Where's the government?" asked Shahid Pasha, 28, a Venezuelan-Lebanese volunteer working with Topos, a Chilean rescue team that was involved in last week's search. Pasha was part of a cleanup effort in one of the buildings damaged by the blast when Thursday's fire started. "What is this? An explosion, one more time?" he added, gesturing to the plumes of black smoke.

When the explosion struck last month, Lebanon was already suffering through its worst economic crisis in decades and struggling to cope with rising cRead More – Source

Journalism Room Feb 4, 2023
The decision to invite Spain was announced in November of last year by the representatives of Venezuela and Norway,…