African students and expatriates in the southern Chinese city of Guangzhou were last week subject to forced coronavirus testing and arbitrary 14-day self-quarantine, regardless of recent travel history, amid heightened fears of imported infections.Large numbers of African nationals were also left homeless, after being evicted by landlords and rejected by hotels in the city. Having reportedly contained the virus within China, concerns have grown in recent weeks over a so-called second wave, brought into the country by overseas travelers. In Africa, however, governments, media outlets and citizens reacted angrily to the apparent rise in anti-foreigner sentiment, as videos of Africans being harassed by police, sleeping on the streets or being locked into their homes under quarantine circulated online. On Saturday, the front page of Kenya's biggest newspaper lead with the headline, "Kenyans in China: Rescue us from hell," as a member of the country's parliament called for Chinese nationals to leave Kenya immediately. TV stations in Uganda, South Africa and Nigeria also ran stories on the alleged mistreatment.The fallout threatens to undermine China's diplomatic efforts in Africa. In recent years, African nations have become key diplomatic and trade partners to Beijing, with China's trade with Africa worth $208 billion in 2019, according to official figures from China's General Administration of Customs. In a statement released Sunday, Chinese Foreign Ministry spokesman Zhao Lijian denied China had been singling out foreigners."We are still facing great risks of imported cases and domestic resurgence. Particularly, as the pandemic spreads all over the world, imported cases are causing mounting pressure," said Zhao."All foreigners are treated equally. We reject differential treatment, and we have zero tolerance for discrimination," he added.

A breakdown in relations

African countries are often characterized as being the weaker partner in bilateral relations with Beijing, with US officials repeatedly warning nations to be wary of so-called Chinese debt trap diplomacy,in which countries are forced to hand over key assets to service loans they can't make repayments on impairing their sovereignty.But in recent days, African governments have been quick to demand answers from Beijing on the treatment of their citizens.On Saturday, Nigerian lawmaker Oloye Akin Alabi posted a video on Twitter of the Chinese ambassador to Nigeria, Zhou Pingjian, being grilled by a Nigerian politician over the mistreatment of Africans in Guangzhou. During the exchange, Zhou is made to watch videos of Africans allegedly being mistreated in China. Oloye accompanied the video with the message that his government would "not tolerate maltreatment of Nigerians in China." The governments of Uganda and Ghana also reportedly summoned their respective Chinese ambassadors over what the Ghanaians called "the inhumane treatment being meted out." Meanwhile, the Foreign Ministry of South Africa, which is currently chairing the African Union, said it was "deeply concerned" by the reports. On Saturday, in perhaps the most serious sign of continent-wide discontent, Moussa Faki Mahamat, chairperson of the African Union Commission, tweeted that he had invited the Chinese ambassador to the AU to personally discuss the allegations of mistreatment.

On Sunday, Chinese Foreign Ministry Spokesperson Zhao Lijian responded to the crisis, promising that provincial authorities would attach "great importance" to the concerns of some African countries and work to improve quarantine measures, including providing special accommodation for foreigners required to undergo medical observation.However, echoing city officials in Guangzhou, Zhao did not address specific accusations that authorities had enforced a policy of mandatory testing and a 14-day quarantine on all Africans, even when they had not left China in recent months; had not been in contact with a known Covid-19 patient; had just completed a 14-day isolation; or had certificates to show they were virus-free. Chinese state media had previously reported that five Nigerians tested had positive for the virus in Guangzhou.Local police said on Sunday that all foreigners must strictly abide by Chinese laws and those who refuse to show identification when requested by police would face punishment. Suspicions abound that many Africans are overstaying their visas in Guangzhou, where officials said they counted 4,553 Africans legally living in the city as of last week. On Sunday, the state-owned Global Times broke its silence on the continued diplomatic fallout, writing that "viral reports in Western media alleging Africans are being discriminated against and badly treated in the city" were "used by some Western media to provoke the problems between China and African countries." 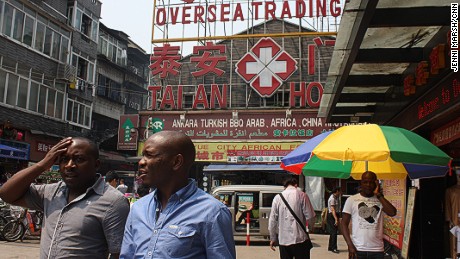 In recent years, legions of Chinese diplomats have joined Twitter, a social media platform that is banned in China.In Africa, CNN counted at least 25 accounts belonging to Chinese diplomats or consulates. But those Twitter accounts, which have repeatedly championed China's aid efforts in Africa in reRead More – Source