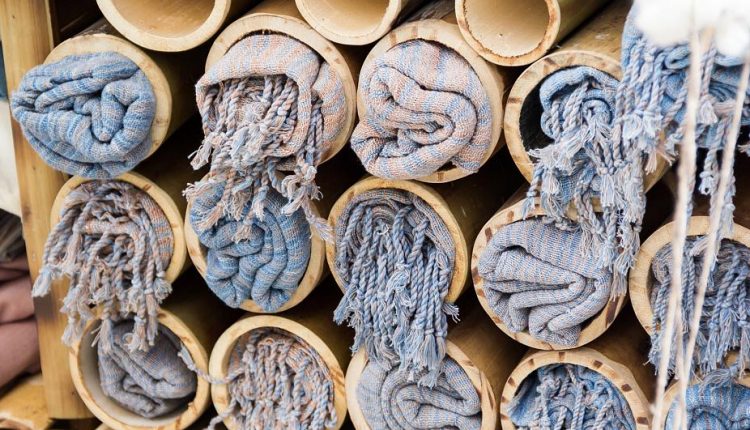 It’s no secret that something drastic needs to be done with the way we produce and consume clothes.

According to the UN, garment production uses more energy than the aviation and shipping industries combined, and accounts for 10 per cent of the world’s greenhouse gas emissions.

Plant-based fibres are one way we can address the problem. From cactus leather to sugar cane to bamboo, the fashion world is just starting to experiment with alternative materials.

Bamboo is being hailed as one of the most sustainable fabrics we can opt for, but is it as eco-friendly as we’re led to believe? Between harvesting and wearing it, the end product isn’t always that natural.

We’ve been speaking to the experts behind a campaign to make the manufacturing process greener. The team are investigating some of the world’s largest producers of viscose – a synthetic material which can be made with bamboo – and say it is possible to manufacture it in a cleaner way.

WHY IS BAMBOO A SUSTAINABLE MATERIAL?

Bamboo is an incredibly renewable and versatile crop. Although it’s tough like wood, it’s actually a type of grass and some species can grow by over a metre a day.

The crop requires very little water and doesn’t need to be sprayed with pesticides or fertilisers to grow. Plus, bamboo releases 35 per cent more oxygen into the air compared to trees of the same size.

As a raw material, bamboo appears to have an endless list of possibilities: from building houses with it to wearing it. So far, it’s been widely adopted by the fashion industry as a cleaner, greener alternative to cotton and wood fibres.

At cultivation level, bamboo appears to be an environmental win compared to cotton. Cotton requires 2,700 litres of water to produce one t-shirt, takes more labour to produce, and needs pesticides, according ethical fashion gurus at Good On You.

However, there is some skepticism surrounding how bamboo is grown. In some cases, huge patches of forests, some of which are ancient or endangered, are being cleared to make way for bamboo plantations.

This is both destroying habitats and reducing biodiversity, and is the reason most don’t explicitly hail bamboo as a completely clean crop. Canadian NGO Canopy states, “it is important to distinguish between bamboo grown and harvested in a manner that meets today’s environmental expectations and bamboo that exacerbates the problems.”

The NGO has set out strict guidance for growing bamboo responsibly. One suggestion is that choosing to grow it on degraded lands rather than clearing forests can have a positive impact.

Even if the bamboo in your clothes was responsibly grown and harvested, there are more bumps along the road when it comes to the manufacturing process.

In order to make fabric out of bamboo, the plant is turned into pulp which is then made into fibres. This is done in one of two ways:

1. Mechanical – bamboo is crushed and the plant’s natural enzymes break it down into fibres. The fibres are then scoured out and spun into yarn. This method is costlier and more labour intensive, meaning it can only really be done on a small scale.

2. Chemical – most of the bamboo clothing we wear is processed chemically, which is harmful to people and the environment. Bamboo processed in this way is more favourable because it produces nice, soft material. But, it’s also then a half-natural and half-synthetic textile and is often labelled as viscose or rayon.

You may notice that lots of your clothes are made from viscose or rayon. Some of these textiles are produced using bamboo fibres, and in some instances, the fabric only needs to be 10 per cent organic bamboo in order for it to be labelled as ‘made with organic materials’.

“For almost all bamboo fibre used in industrial textile production, not the natural bamboo is used but it is melted and regenerated in a viscose / rayon process and can therefore not be considered as natural or even organic fibre, even if the bamboo plant was certified organic on the field.”

Viscose and rayon are two common synthetic materials produced to make clothes. And as we now know, they’re made using the pulp from trees and plants, including bamboo.

Whilst bamboo is seen as a more sustainable and renewable crop than trees, the pulp is still subject to harsh chemical processing which is harming the environment and the communities near production sites.

We spoke to Urska Trunk from European campaign, Dirty Fashion, who has been investigating some of the biggest viscose producers in India, Indonesia and China.

It’s been discovered that the dangerous chemicals involved in the manufacturing process of viscose aren’t always being properly managed, which is leading to health and environmental issues.

“We don’t see viscose as an inherently unsustainable fibre,” says Trunk. “The industry uses a lot of toxic chemicals and some of them are really notorious: carbon disulphide, sodium hydroxide, caustic soda and so on.”

“We found that most factories were dumping untreated wastewater into their local waterways, to lakes, to rivers which pollutes not only the ecosystem, but this also had really big impacts on the health and the livelihoods of people living around it. We found a growing incidence of diseases such as cancer in the villages around the production sites.”

But it doesn’t need to be this way. Trunk says a solution already exists, but it needs to be implemented more widely.

In 2017, the Dirty Fashion campaign set out a roadmap for viscose producers to convert to a ‘closed loop’ system. “That means that chemicals, instead of being released into the environment, are recycled back into the process and reused,” explains Trunk.

This comes in addition to a set of targets to safely treat waste water and prevent gas emissions coming out of factories. But producers need the backing from their brands to do this.

TOWARDS A CLOSED-LOOP SYSTEM

The roadmap is based on the toughest set of best practices which currently exist from the EU Best Available Techniques (EUBAT).

“It’s a combination of small players and takes investment to bring technology up to standard,” says Trunk. “So the factories that have really old technology will need support from their clients, their investors and so on to move forward.”

Brands and suppliers who commit to the pledge have been set the target of achieving a closed-loop system by 2023/25.

Since 2017, the campaign has seen fourteen high street brands including H&M, Inditex group and M&S publicly commit to this. And two of the world’s leading viscose producers – Lenzing and Aditya Birla Group – have set aside specific funds of more than €100 million each to achieve closed loop production in the next four years.

But at the end of the day, Trunk says that the consumer holds the purchasing power, and they can use this to put pressure on brands who aren’t producing responsibly.

She recommends checking a brand’s position on viscose production using this table on Dirty Fashion’s website. “Refrain from buying from companies who don’t have any policies, who are not transparent about their practises and their supply chain,” she concludes.

And above all, “the most sustainable outfit is the one you already have in your closet.”