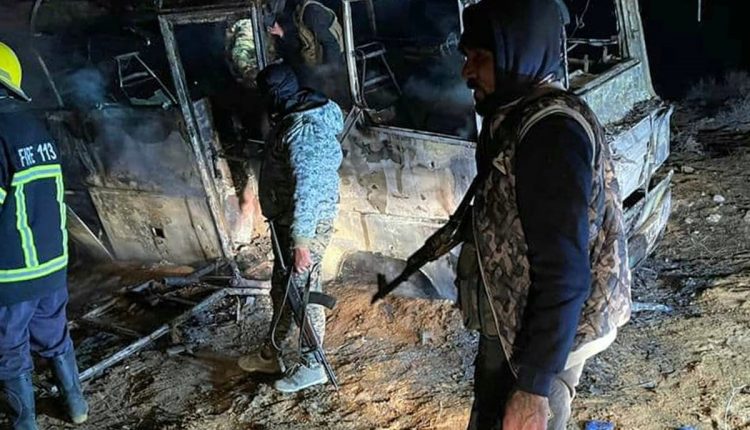 At least 27 people have died in Syria after the rare bombing of an army bus in Damascus, followed by what appeared to be tit-for-tat regime shelling of a town in the rebel-held north-west that killed four children on their way to school.

Two bombs planted on a bus carrying soldiers in central Damascus were detonated during the Wednesday morning rush-hour, killing 14 people in the worst such attack in the capital in four years, the Sana state news agency reported.

There was no immediate claim for the bombing, but about an hour later shelling by government forces killed 13 people and injured another 20 in the town of Ariha in Idlib province, an area controlled by groups that have claimed such attacks in the past.

A military source quoted by Sana said the explosives had been detonated as the vehicle passed near the Hafez al-Assad bridge, close to a bus depot and a museum in the heart of the capital. It was not immediately clear whether civilians were among the casualties.

Damascus had been largely spared such violence in recent years, especially since Syrian government forces, with the help of Iranian and Russian allies, retook Eastern Ghouta, the last significant rebel bastion in the city’s outskirts, in 2018. Wednesday’s attack is the deadliest in the capital since a bombing claimed by the Islamic State group targeted a judicial office building and restaurant in March 2017, killing more than 30 people.

In Ariha, shelling of the town’s market at around 8am (0600BST) killed three boys, one girl and a teacher as they walked to school, the Save the Children aid group said.

“The children were terrified and were screaming,” said Bilal Trissi, a father of two who lives nearby. “We didn’t know what to do or where to go and we didn’t see anything because of all the dust around us,” he told Agence France-Presse.

“They bombed us in our neighbourhood and in the market. There are children who died and people who lost their limbs … We don’t know why. What are we guilty of?”

The attack on Ariha is one of the deadliest violations of a 2020 ceasefire deal for Idlib brokered by Turkey and Russia, which are now the two main foreign players in the 10-year-old conflict.

Bashar al-Assad’s position once hung by a thread after a brutal crackdown on Arab spring protesters ignited the civil war, with his forces and allied militias controlling barely a fifth of Syrian territory. Russia’s military intervention in 2015, however, marked the start of a long and bloody fightback.

Also backed by Iran and its proxy fighters, government forces have recaptured nearly all the key cities in the country, with US-backed Kurdish forces still running the north-east.

Since IS was driven from the last of its territory in early 2019, the Syrian government’s main focus has been Idlib, where many of the rebels forced to surrender in other parts of the country have gathered.

The area is dominated by the jihadist group Hayat Tahrir al-Sham (HTS), which includes leaders of al-Qaida’s former Syrian branch and over which Turkey has some sway.

HTS has not claimed attacks in Damascus in years, however. The remnants of IS have gone underground but continue to harass government and allied forces, mostly in desert areas, in hit-and-run attacks.

In another incident on Wednesday, six members of a pro-government militia were killed in an arms depot blast in the central province of Hama, a war monitor said.

Seven other members of the National Defence Forces militia were wounded in the explosion, the cause of which remains unclear, the monitor added.

The bombing of the capital will challenge the Syrian government’s assertion that the decade-old war is over and stability guaranteed for reconstruction efforts and investment projects to begin in earnest.

While Assad’s forces continue a decade-long campaign of bombing civilian targets, and more than 100,000 people remain “disappeared” in regime prisons, in recent months Damascus has made strides in emerging from international isolation.

During the past year, officials from once-antagonistic Middle East states have travelled to the country for meetings. The United Arab Emirates and Saudi Arabia have sent delegations to the Syrian capital to meet its spy chiefs, while Egypt and Qatar have also made overtures. Meanwhile, Jordan’s King Abdullah in August lobbied members of the US Congress on the need to re-engage with the Syrian leadership, and two months later, spoke to Assad on the phone in the first publicly acknowledged contact in a decade.

Last month, Washington also appeared to contribute to Assad’s resurgence. In an attempt to solve Lebanon’s energy crisis, the US embassy in Beirut announced a plan to send Egyptian natural gas via Jordan and Syria. The proposal gave Assad a direct stake in finding a solution for Lebanon.