Iran was already struggling with one crisis. Now it has the worst coronavirus outbreak in the Middle East

Despite the spread of the virus, President Hassan Rouhani said on Wednesday that authorities won't quarantine any Iranian cities. He also warned about the virus becoming "a weapon at the hands of our enemies," as part of "propaganda" against the country. Rouhani said the virus should not further cripple the country's economy. Iran has the most coronavirus cases in the Middle East, and is in an ongoing state of economic crisis. US sanctions on the country have seen its currency tank and unemployment grow. In China's Hubei province, the epicenter of the virus, reported fatal cases of coronavirus would put the death rate at around 2%. South Korea, another outbreak center for the sickness, would have a mortality rate from the virus of around 1% based on figures provided by that country. In Iran, according to numbers provided by the Iranian health ministry, the death rate from Covid-19 would be over 13%. It's unclear why Iran's mortality rate might be higher than other countries with outbreaks of the pathogen, but some suspect under-reporting of the total number of cases. The US sanctions have also dealt a blow to Iran's medical sector, which has struggled to keep up with soaring prices of medicines and medical instruments. Iranian officials are scrambling to contain the virus, as well as the fears it has sown. Many schools and public offices around the country have closed. On Wednesday, officials banned hookah from cafes in a bid to stem the contagion. But in the holy city of Qom, ground zero of the country's coronavirus outbreak, pilgrimages have continued unabated, despite health officials calling on clerics to limit visitors to the city. 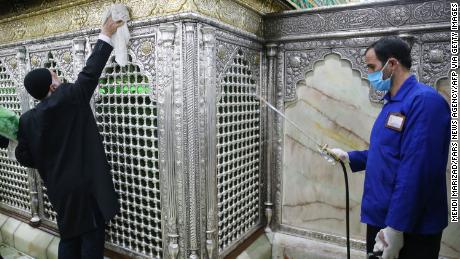 As of Tuesday, crowds still gathered around the shrine of Fatima Masumeh, a revered figure in Shia Islam, the religious sect of most Iranians. Throngs were seen touching the shrine and performing communal prayers. Of 28 new cases reported on Wednesday, 15 new cases were from Qom. Iranian officials are also becoming infected with the virus. On Tuesday, Deputy Health Minister Iraj Harirchi tested positive for novel coronavirus, a day after downplaying the sickness at a news conference. At the presser, Harirchi appeared ill, wipRead More – Source

UN and partners launch $267 million appeal to respond to immediate needs of 10.1…

Afghanistan: Government should prioritize the release of women…