LODI, Italy — In Lombardys quarantined towns, paranoia is spreading faster than any virus.

As of Sunday, 10 municipalities in the northern regions Lodi province and another town in neighboring Veneto have been placed on lockdown after coronavirus cases in Italy surged from just a handful last week to more than 300 infected and 10 dead since the weekend.

The 11 towns, home to some 50,000 people, are closed off from the outside world. Police officers and the military are manning checkpoints at all access roads; nobody can enter or leave.

In this so-called red zone, life is on hold. But even in the yellow zone — the area around the quarantined towns where people are free to leave but have been advised to remain indoors — the streets are deserted and silent. All schools, restaurants, bars and most shops are shuttered; carnival parades were canceled, and churches have suspended Mass. 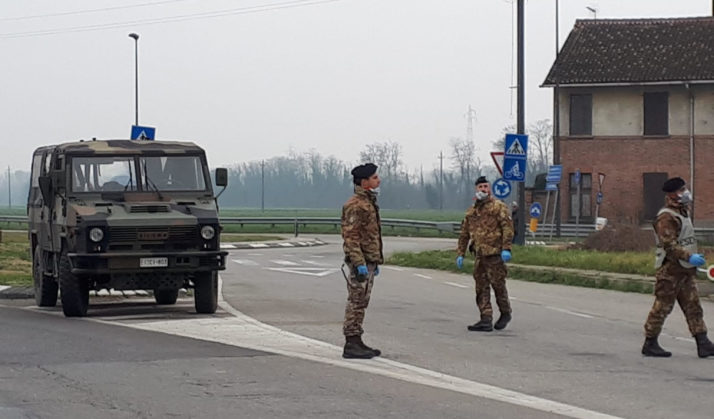 As we watch out for the smallest sign of a possible symptom, we fill our days with work — at least those, like me, who are able to work from home — and we wait, the smokers among us counting cigarettes to have enough until the next time we can find an open tobacco shop.

We had been told that food supplies would not be a problem and that necessities would be provided, but nobody knows for sure. So this weekend, everyone went to stock up on the basics; now our cupboards overflow with pasta, rice, canned goods and flour.

In fact, even in the red zone, supermarkets are still open, but nobody knows for how long they will remain so. People there can enter the stores only in small groups — at most 40 people for a big store and three if its a small one — as a precautionary measure. (Its anyones guess how effective that is, given that people still stand in line together for hours to get into the shops.) Pharmacies in the red zone are open too, but some have begun serving customers only through a small window.

Across the province, many are anxiously waiting for their test results or those of loved ones.

The fear wasnt there from the beginning. At first, it all felt like a grand collective adventure. It also seemed rather unreal, as if wed been dropped onto the set of “The Walking Dead.”

The quarantined towns authorities are at a loss, too. “We were left alone,” said Costantino Pesatori, the mayor of Castiglione dAdda, one of the municipalities in the red zone. “Ministries and local authorities dont let us know anything. They give us no answer. Really, we dont know what to do. Since Friday there have been deaths, but no one has given us any instructions.”

Across the province, many are anxiously waiting for their test resRead More – Source

What we know about the Beirut blast

Chemical linked to Beirut blast caused past explosions in Texas,…