Dozens of gravestones vandalized in Jewish cemetery in Slovakia

The tombstones were tipped over and broken up in the Jewish cemetery in Namestovo, near the Polish border, the leader of Slovakia's Jewish community said.Non-Jewish locals had been taking care of the cemetery for decades, since the local Jewish community was murdered in World War II, Richard Duda said in a statement."The tombstones remained untouched for many decades and survived the Second World War, which took away those whose descendants would be caring for the graves of their loved ones today," Duda said."The locals realized that relatives could no longer take care of the graves because they flew up the chimney," he said, in a reference to the ovens where Jews were burned in the Holocaust. "The Central Union of Jewish Religious Communities in Slovakia asks all decent citizens of Slovakia not to remain silent," he said.Karol Kurtilík, who heads the civic association Pamätaj (Remember), said he hoped the monuments would be restored quickly and that a new security system would be installed at the cemetery. "So that this never happens again," he added in a post on the cemetery's Facebook page. 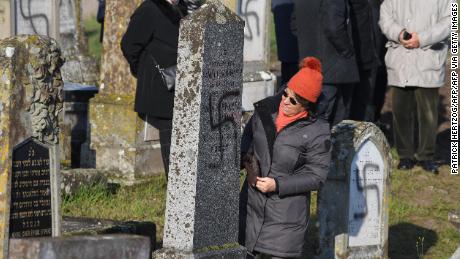 Pamätaj has been taking care of the cemetery for years, and Kurtilík said the unknown vandals had destroyed a near decadelong restoration work of the association. "Such [a] terrible act of vandalism is something that hasn't happen even during Second World War," he added.The World Jewish Congress lamented the attack, which was discovered on Monday, pointing out it was a relatively rare event in the country."The Jews of Slovakia have in recent years been fortunately spared of overtly aggressive expressions of anti-Semitism, but it has become sadly clear that in the climate of xenophobia and hatred spiraling across Europe, every minority commRead More – Source

Drive-through funerals in the epicenter of Spain’s coronavirus pandemic