In seizing a foreign tanker which it accuses of "violating international regulations," Tehran has resorted to a form of piracy in international waters. At a time when Iran might have begun to win friends and influence people in the world's corridors of power, it's showing that it really could be the force of dangerous instability that its most ardent enemies have claimed. Iran has legitimate frustrations over the American withdrawal from the nuclear deal that was supposed to swap limiting its nuclear program for an end to economic sanctions.The United Kingdom, France, Germany, China, the European Union agree. They've been aghast at US sanctions against a nation that, according to the International Atomic Energy Agency, had met its obligations under the deal.Germany, France, and Britain have been working to circumvent US sanctions and to give Iran's leadership, which agreed to the nuclear deal over the objections of hardliners, a financial boost in return.But clearly moderate voices in Tehran have been silenced. No longer can Javad Zarif, the foreign minister, enjoy a rueful understanding among his international peers when sneering at the White House's "B-Team" — a term he coined to highlight the links between Israeli Prime Minister Benjamin Netanyahu, national security advisor John Bolton, the Crown Prince of Saudi Arabia, and the United Arab Emirates, when it comes to policy on Iran. 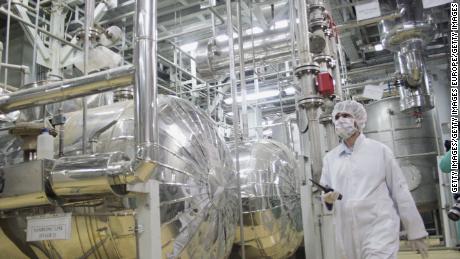 When he started using the term, it was the Americans who were tearing up treaties and international agreements on the environment and riding roughshod over international norms and conventions. Now Iran has joined in a dive to the bottom of the barrel.Sure, Iran has been irritated by the seizure of its own oil tanker, the Grace I, by Gibraltarian and British authorities. But the UK and Iran had been trying to negotiate a way to release the tanker and keep the nuclear deal on track.But now a British tanker is in the clutches of the Iranian Revolutionary Guard Corps after it was seized in international waters.With no legitimate basis for such a seizure, Iran is committing an act of aggression against a sovereign vessel that, in theory, could be met with an aggressive response.Read More – Source

Bask in the glory of these crème brûlée crepe cones

Lebanese protesters rally in Beirut to mark 100 days of demonstrations

Mayor of China’s Wuhan expects another 1,000 virus cases in the city

As govt decides to go global with tribal products, focus on quality…